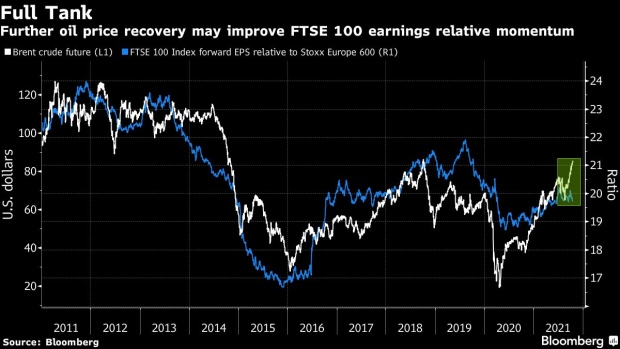 Hang in there -- that’s been the simple motto of equity market mavens who are bullish on the FTSE 100 Index.

The U.K. benchmark is one of only a handful of major indexes that have yet to fully recover pandemic losses, being down more than 3% in that time. Among the main concerns of investors is a supply crunch that’s more acute for Britain than many other advanced economies due to the country’s high dependence on trade and because Brexit exacerbated a trucker shortage.

“Brexit disruptions are having a huge sentiment effect on U.K. assets,” said Edmund Shing, chief investment officer at BNP Paribas Wealth. The energy crisis is another cause for concern, he said.

After years of relative underperformance, dating back before the 2016 referendum on leaving the European Union, U.K. stocks are cheap. The FTSE 100 trades at a near-record 40% valuation discount to the S&P 500, and at 20% discount to the euro-area benchmark Euro Stoxx 50.

“The market was held back during the Brexit negotiations, then by the early Covid challenges, and now by the short-term pressures on supply and energy prices,” said Jeffrey Sacks, EMEA investment strategist at Citi Private Bank.

For an index that’s heavy on oil stocks and miners, one might have expected the recent surge in energy and commodity prices to have been beneficial. Indeed, the oil price points to better relative EPS momentum ahead for the benchmark. Yet there’s a flip side, with new-age investors who pay attention to environmental, social and governance rules being prohibited from having exposure to such names.

“The exposure to miners and oils could be seen as a positive as commodity prices rise, but ESG screens may filter these out for a lot of investors and make the FTSE 100 a bit of a no-go zone,” said Russ Mould, a director at AJ Bell Investment.

The icing on the cake for the believers is the ever-so-generous shareholder returns. Dividend yields remain high and buybacks have risen sharply, which Goldman Sachs Group Inc. strategists say highlights the strength of cash flows, good balance sheets and a reluctance by companies to increase investment given current levels of uncertainty.

Martin Walker, head of U.K. equities at Invesco Ltd., is optimistic that investors will eventually be rewarded for their patience. “As the earnings story becomes better appreciated, we believe there will be substantial room for further valuation re-rating,” he said.