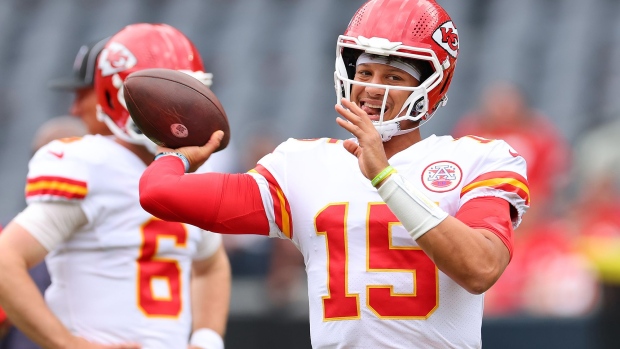 (Bloomberg) -- Kansas City Chiefs quarterback Patrick Mahomes is getting behind NFT firm Dapper Labs Inc., making him one of the first major celebrities to endorse a crypto company after the industry’s dramatic crash.

The Super Bowl champion will be the 2022 season’s face of Dapper’s “NFL ALL DAY,” a digital-video-highlight platform for nonfungible tokens, which is going live on Thursday. The company hopes Mahomes will drive fan engagement with in-product features and events, among other things, according to a press release.

“I’m excited for fans to own their favorite Moments from the players and teams that they love, being able to connect directly with players -- bridging that gap through ALL DAY is awesome,” Mahomes said.

Dapper did not disclose the terms of the deal. The company also has other celebrity backers, including Michael Jordan and Kevin Durant.

Mahomes’ entrance into the crypto sphere is notable not only because he’s a big name in football but also because the space is going through a rough patch that’s slowed the number of celebrity backings lately. He will be one of the first to lend his name to a crypto firm after digital-asset prices started to plummet earlier this year. One of soccer’s biggest stars, Cristiano Ronaldo, recently signed a deal with crypto exchange Binance, while Lionel Messi signed with fan token specialist Socios.

A slew of celebrities aligned themselves with crypto companies over the last two years as prices skyrocketed. Matt Damon’s appearance in a crypto-exchange ad perhaps exemplified the trend most infamously -- the actor was lambasted for promoting risky investments, and the price of Bitcoin has, since the start of the year, dropped some 50%. Those celebrities have mostly kept mum since the market started to cool.