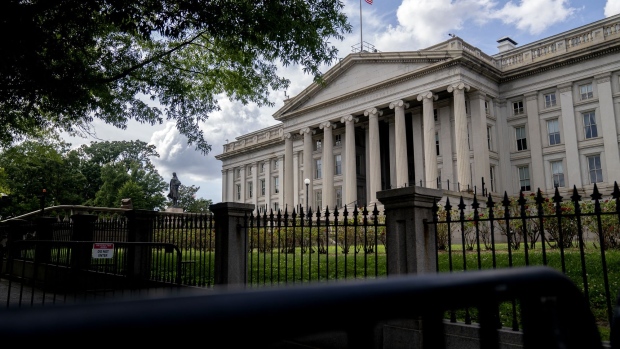 (Bloomberg) -- Six former Treasury secretaries appealed to congressional leaders to raise the statutory limit on U.S. debt in order to avoid a debilitating default on the U.S. government’s financial obligations.

“Even a short-lived default could threaten economic growth,” the bipartisan group, which included Robert Rubin, Henry Paulson and Lawrence Summers, wrote in a letter dated Wednesday to Democratic and Republican leaders on Capitol Hill. “It creates the risk of roiling markets and of sapping economic confidence.”

Democrats this week are pursuing an almost certainly doomed attempt to pass a bill that would fund the government through the end of the year and suspend the debt ceiling for a year. Republicans have pledged to block the legislation in the Senate.

The limit kicked in at $28.4 trillion at the beginning of August following a two-year suspension, forcing the Treasury to employ so-called extraordinary measures to avert breaching the ceiling. Treasury Secretary Janet Yellen has said the department will run out of money some time in October.

The letter from former Treasury secretaries also backed the Treasury’s assertion that it could not prioritize payments in the event of a default to make sure investors in Treasury securities were protected.

“There is no viable way to manage payments across the federal government to prevent a default if there are insufficient resources available absent action on the debt limit,” they wrote.