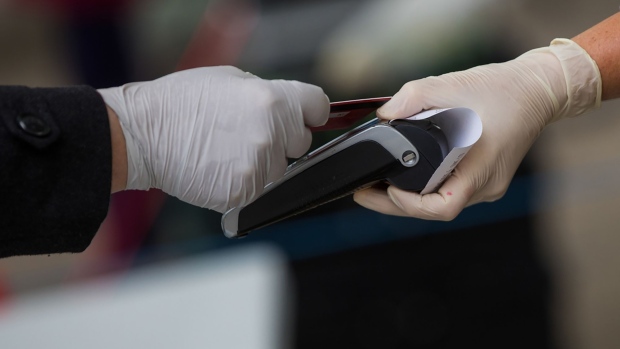 A customer uses a bank card to make a contactless payment on a market stall in Norwich, U.K., on Tuesday, June 9, 2020. With the economy on course for its deepest recession for at least a century, the government is now paying the wages of more than 10 million workers to stave off mass unemployment. Photographer: Chris Ratcliffe/Bloomberg , Photographer: Chris Ratcliffe/Bloomberg

Patty Walters, who served as senior vice president of security and services, worked at the maker of payment terminals in Jacksonville, Florida, for nearly three years, according to her LinkedIn profile. She confirmed her resignation in a message to Bloomberg but declined to elaborate Wednesday on the circumstances surrounding her departure.

PAX Technology is a unit of PAX Global Technology Ltd., a Chinese-rooted company whose terminals are used to process millions of transactions in stores worldwide. According to the company, it has supplied 57 million terminals to more than 120 countries.

On Tuesday, the Federal Bureau of Investigation and other federal agencies executed a search warrant on several PAX Technology locations in Jacksonville.

Brian Krebs, an independent cybersecurity researcher, reported that British and American security agencies began investigating PAX Technology after an unnamed U.S. payment processor noticed “unusual network packets” originating from the company’s payment terminals. According to Krebs’s report, the FBI raid on Tuesday was linked to reports that PAX’s systems may be involved in cyber-attacks on U.S. and EU organizations and to suspicions that its terminals had been used as a “command and control” staging point for conducting hacks and collecting information.

Worldpay, the online payment processing unit of FIS, began replacing PAX terminals this month due to security concerns, Bloomberg reported Wednesday. Worldpay told partner companies on Oct. 8 that it was removing PAX products in favor of equipment made by U.S.-based VeriFone Inc. and France’s Ingenico Group SA, according to a message reviewed by Bloomberg.

Worldpay provides infrastructure used by consumers to pay for services online or buy food at a grocery store. In 2019, it was acquired by Fidelity National Information Services Inc. for $35.5 billion, the largest-ever deal in the international payments sector.

A spokesperson for PAX Technology confirmed in a statement that it had received an “unexpected visit” from the FBI and other agencies on Tuesday but was “not aware of any illegal conduct by it or its employees” and was engaging legal counsel to learn more about the investigation.