BMO shelling out more on wages in aggressive U.S. push

Bank of Montreal’s push into the U.S. has proven fruitful for its employees -- and challenging for a company seeking to get its expenses under control.

Among Canada’s six largest banks, pay has grown fastest at Bank of Montreal since last decade’s financial crisis. Compensation per employee at the Toronto-based firm is up 18.6 per cent since fiscal 2007 when adjusted for nominal wage growth, according to company filings and calculations by Bloomberg. That’s made Chief Executive Officer Darryl White’s mission to improve efficiencies more difficult.

Canada’s biggest banks are more profitable than ever, with years of low interest rates and a stable economy fueling record consumer borrowing, and strong housing markets in Vancouver and Toronto spurring demand for mortgages. Like their counterparts in the U.S., Europe and Asia, the firms are increasingly turning to technology and automation to drive down costs.

That’s good for the banks, but less beneficial for workers: Average compensation across the biggest Canadian lenders is down 1.8 per cent over 11 years. Canadian banks that have made big forays into the U.S., as well as other regions with high wages, are bucking that trend. 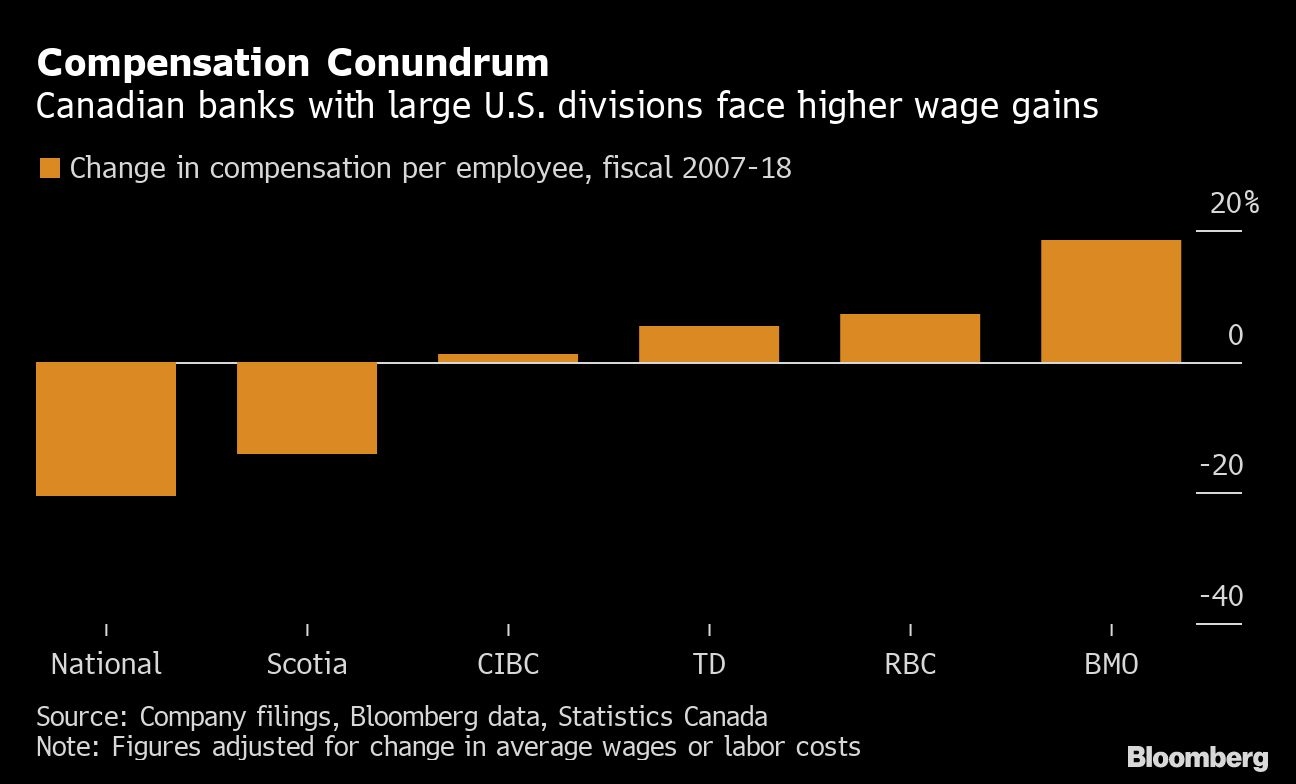 Bank of Montreal, which owns Chicago-based BMO Harris Bank, took over Milwaukee-based Marshall & Ilsley Corp. in 2011, U.K. fund manager F&C Asset Management in 2014 and a transportation-finance business from General Electric Co. the following year, and there have been additional capital-markets deals in the U.S. since. Those acquisitions have swelled Bank of Montreal’s ranks -- with higher-paid professionals to boot.

The company, meanwhile, has been working to control its expenses. It’s targeting an adjusted efficiency ratio -- a measure of what it costs to produce a dollar of revenue -- of 58 per cent or better by the end of fiscal 2021. In the third quarter, it was 59.9 per cent, the lowest in at least six years.

“Our bank-wide revenue per employee is among the highest in the Canadian banking sector and, as a consequence, our cost per employee is on the higher side as well -- the two items are very much related,” Chief Financial Officer Tom Flynn said in an email. “We continue to make progress on improving the bank’s overall efficiency.”

It’s not the only Canadian bank whose compensation has swelled with U.S. acquisitions.

Toronto-Dominion Bank’s 5.4 per cent increase in per-employee pay came after the company spent much of the early 2000s expanding in U.S. retail banking, with takeovers of Banknorth Group Inc. in Maine, Commerce Bancorp Inc. in New Jersey and South Financial Group Inc. to expand in Florida and the Carolinas. Those acquisitions helped fuel a 65 per cent expansion in Toronto-Dominion’s workforce between 2007 and 2018.

Royal Bank of Canada’s business mix has much to do with a 7.1 per cent increase in per-employee compensation since 2007. Growth in wealth management and capital markets over the past decade at the country’s largest lender has topped expansion at Canadian rivals, which have smaller operations in those areas. A drive to be a Top 10 investment bank in the U.S. also boosted pay, since capital-markets compensation is higher in the country than in Canada.

Pay hasn’t been an issue for all Canadian banks expanding abroad. Montreal-based National Bank of Canada, for example, is seeing the benefits of taking over Cambodia’s Advanced Bank of Asia Ltd., a process that began in 2014 with the purchase of a 10 per cent interest and grew into a 90 per cent controlling stake by 2016. National Bank’s per-employee compensation dropped 20.5 per cent over 11 years.

“The explanation is essentially the growth of the number of employees we’ve had in Cambodia, where the average salary is significantly lower than the Canadian average,” CEO Louis Vachon said in an interview. “In 2014, we had 600 employees in Cambodia, and by the end of this year we’ll be over 5,000.”

National Bank acquired the rest of ABA Bank in October. Employees in Cambodia, who now represent almost a quarter of the parent company’s overall workforce, have an average annual compensation of around $10,000, compared with $110,000 for Canadian employees, according to the bank.

At Bank of Nova Scotia, a 14% decline in per-employee compensation came after the Toronto-based company boosted its employee base by two-thirds in the 11-year period. About 80% of the additional workers are in international banking, in countries with lower wages than in Canada. Scotiabank has expanded with several Latin American acquisitions, including purchases in Chile, Peru and Colombia.

“Our footprint is what makes Scotiabank unique,” spokesman Clancy Zeifman said, “and more than half of our employees work outside of Canada.”

--With assistance from Yalman Onaran.