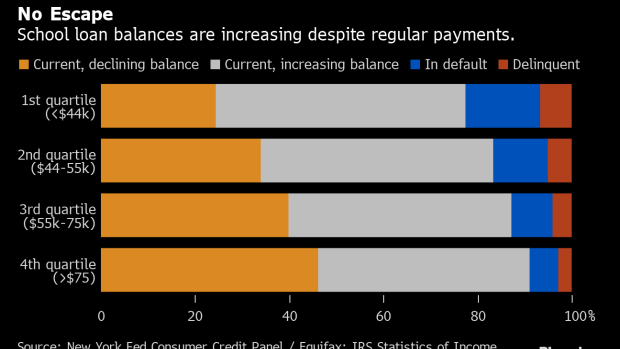 (Bloomberg) -- Borrowers struggle to whittle down their school loan balances even when they make regular payments, according to the New York Federal Reserve.

Just 36% of borrowers who were current in their loans in the second quarter made a dent in their balance over the past year, the study found.

Although borrowers with lower income have the hardest time reducing their outstanding balances, even high-earners struggle to pare their debts.

Class of 2005 graduates had repaid less than 40% of their outstanding balances 10 years after leaving school. The Class of 2010, which graduated shortly after the recession ended, was even worse off: only 9% of their balances had been repaid five years after graduating.

“Slow repayment has long-lasting consequences,” the Fed said in the report. For example, higher student debt balances are associated with lower rates of homeownership among college graduates, according to a 2017 New York Fed study.

The average balance per student-loan borrower grew about 5% per year in the decade since 2008, outpacing a rise in tuition costs, the Fed said.

About 43 million people carry student debt and the average amount is $33,500, although the median balance is under $18,000, the Fed said.

About 15% of borrowers with loans in a repayment cycle were 90 or more days past due or in default in the second quarter.

Not included in the Fed study were loans currently in deferment because the student is still attending school, in grace periods mostly due to a recent graduation, or in forbearance. That could mean the delinquency rate is even worse.

To contact the reporters on this story: Virginia Van Natta in San Francisco at vvannatta@bloomberg.net;Alex Tanzi in Washington at atanzi@bloomberg.net

To contact the editors responsible for this story: Linus Chua at lchua@bloomberg.net, Ros Krasny, Steve Geimann