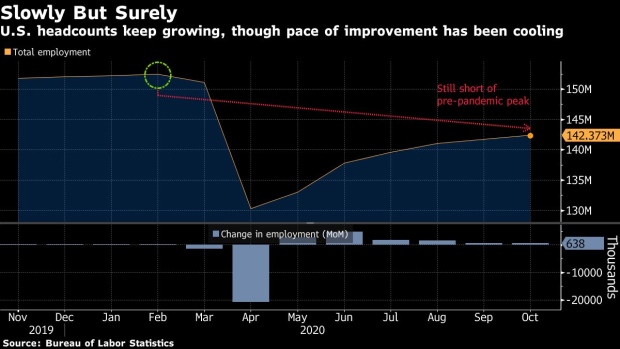 (Bloomberg) -- U.S. employers probably continued to beef up their headcounts in November, even though the pace of hiring slowed for a fifth month.

Payrolls probably rose by about a half million during the month after a 638,000 gain in October, according to the median projection in a Bloomberg survey of economists ahead of government data due on Friday. The jobless rate is seen easing to 6.8% from 6.9%.

More payrolls would still leave total employment well below its pre-pandemic peak, when more than 152 million Americans were working. While the state of the job market has brightened as household savings fuel spending and business investment rebounds, the coronavirus continues to impact a swathe of industries, most notably travel and leisure.

“Recently, the labor market has started to show signs of strain, with jobless claims moving higher and virus-related lockdown measures being reinstituted as case counts surge, but these factors will be more fully felt in the December data. As such, the November data may reflect the final heady gains of the second half rebound/reopening. December will reflect sharp downdrafts due to the third wave of Covid-19.”

Other U.S. economic reports this coming week are projected to show manufacturing expanded at a solid clip in November, while construction spending accelerated a month earlier in conjunction with a robust housing market.

Powell and Mnuchin face off this week over the Trump administration’s controversial decision to wind down several emergency Fed lending programs. Democrats branded the Nov. 19 move as a crude way of denying fiscal support to Biden’s incoming administration.

Powell and Mnuchin testify before the Senate Banking Committee on Tuesday, and a day later before the House Financial Services Committee, in a quarterly appearance to discuss the CARES Act, under which Congress in March authorized over $2 trillion in pandemic aid.

Mnuchin extended four pre-CARES Act facilities for 90 days, but declined Powell’s request to do the same for Fed lending facilities for mid-sized borrowers and cash-strapped municipalities. He also demanded back several hundred billion dollars in unused CARES Act funds, which Powell subsequently agreed to do.

In Canada, Justin Trudeau, already one of the world’s most enthusiastic champions of fiscal stimulus, will deliver another dose of spending this week to fuel his country’s economic recovery and respond to a second wave of the pandemic. His government is set to present a fiscal update on Monday. That’s ahead of GDP data on Tuesday that’s likely to show a third-quarter rebound that’s already stalled.

Japan’s production and retail sales data on Monday will offer the latest measure of the recovery’s strength, while capital spending figures on Tuesday will be used to revise third quarter gross domestic product figures. Speeches by Bank of Japan board members will shed light on current thinking at the central bank.

China’s PMI report on Monday will give the first official reading of the economy’s momentum in November, while regional manufacturing gauges the next day will show how well factories are coping as their outlook is threatened by the renewed spread of Covid-19 across much of Europe and the U.S.

Australia’s central bank is expected to have a quiet meeting on Tuesday after unveiling its new quantitative easing program and cutting rates to fresh lows at its November meeting. Governor Philip Lowe will brief a parliamentary committee on how all of that is progressing and on other issues on Wednesday, the same day third-quarter GDP numbers are set to show a recovery from recession has begun.

On Friday, the Reserve Bank of India is widely expected to keep benchmark rates unchanged, given a spike in headline inflation, but will reiterate its accommodative policy stance to help the economy recover.

With the U.K.’s crucial spending review out of the way, attention will be turning to crunch talks with the European Union over Brexit, as both sides race to reach a trade deal before the transition period expires in just over a month.

On the data front, euro-area inflation figures on Tuesday will likely cement expectations that the European Central Bank will top up its stimulus program on Dec. 10. ECB President Christine Lagarde is scheduled to speak twice before her institution starts its quiet period on Dec. 3.

Denmark and Iceland report GDP growth estimates for the third quarter after posting record contractions in the previous three months.

In eastern Europe, Poland’s central bank is expected to keep interest rates on hold. Czech Prime Minister Andrej Babis will try to persuade other parliamentary parties to curb back planned tax overhaul after lawmakers approved a version that deepens the budget deficit more than he expected.

Turkey may report a modest rebound in economic activity on Monday, with analysts forecasting 5% growth in the third quarter after a 9.9% contraction in the second. But inflation data on Thursday will probably show prices rose by about 13% in November, a month that saw the start of sweeping reforms of economic policies following the resignation of Berat Albayrak, the president’s son-in-law, as economy czar.

The Bank of Israel, reluctant to take interest rates negative, will probably keep its benchmark at 0.1% on Monday, though it’s struggling to control appreciation of the shekel, now at a 12-year high. Botswana’s central bank, after cutting its benchmark rate to a record low in October, is set to hold on Thursday.

Chile’s October retails sales, industrial output and economic activity reports out Monday and Tuesday should be consistent with an economy pulling out of recession even if it’s not yet firing on all cylinders.

In Colombia, minutes of the central bank’s Nov. 27 meeting posted Monday may offer guidance on the timing of policy tightening from the current record low 1.75%.

In Brazil on Monday, the October budget report from the central bank will show ballooning deficits and mounting public debt, which some forecasts put near 100% of GDP by year-end. Much of the red ink is due to a massive income support program for roughly 30% of the population that’s boosted President Jair Bolsonaro’s popularity and likely has Brazil heading for the shallowest 2020 recession of the region’s six biggest economies. Third-quarter output data published Thursday should feature the highest year-on-year result among the region’s larger economies.