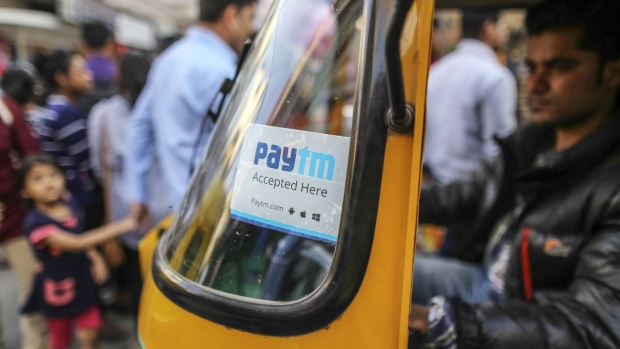 A sign for PayTM online payment method, operated by One97 Communications Ltd., is displayed on the front windscreen of an auto rickshaw in Bengaluru, India, on Saturday, Feb. 4, 2017. A relative laggard in digital transactions, India has more recently seen 50 percent year-on-year growth, according to a study by Google and Boston Consulting Group. The pace may accelerate with demonetization giving digital wallets like Paytm, MobiKwik and Freecharge an extra push. Photographer: Dhiraj Singh/Bloomberg , Bloomberg

The Securities and Exchange Board cleared the IPO, which will be India’s biggest so far, on Friday, according to people familiar with the matter. The company could list in Mumbai by mid-November, they added, asking not to be identified as the information isn’t public.

A representative for Paytm declined to comment. An email to Sebi wasn’t immediately answered.

Paytm said in its draft prospectus that it plans to sell an equal number of new and existing shares.

The firm has the biggest share in India’s merchant-payments market, with over 20 million merchant partners in its network. Its users make 1.4 billion monthly transactions, according to numbers in a recent company blog post.