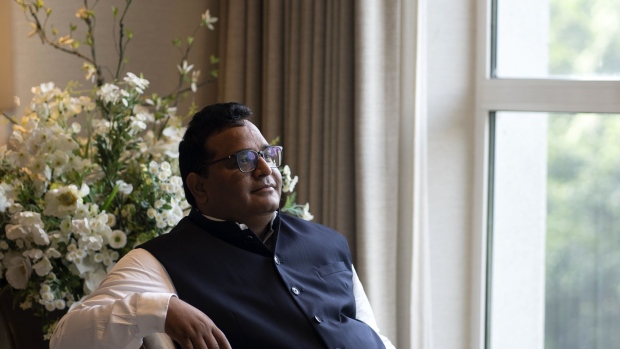 Vijay Shekhar Sharma, founder and chairman of One97 Communications Ltd., operator of PayTM, holds up a sign at the listing ceremony of the company's IPO at the Bombay Stock Exchange in Mumbai, India, on Thursday, Nov. 18, 2021. One 97 Communications Ltd., which operates India's pioneering digital-payments brand Paytm, fell in its trading debut in Mumbai as investors questioned the company's valuations and path to profitability. , Bloomberg

(Bloomberg) -- After a turbulent debut for the company behind India’s largest initial public offering, Paytm’s top executives spent 90 minutes on a call with investors and analysts on Saturday as they dissected its business model and raised questions on monetization.

Whether officials have done enough to ease doubts on revenue streams and profitability prospects remain to be seen when markets reopen. One97 Communications, the parent of the digital payments giant, ended last week 17% below its offer price of 2,150 rupees ($28.68), after falling to as low as 1,271 rupees at one point.

Over the weekend, One97 reported losses widened to 4.74 billion rupees in the July-to-September quarter from a year ago amid rising expenses. Revenue rose more than 60% in the same period, boosted by growth in financial, commerce and cloud services.

“Strong momentum in revenue growth will continue,” Chief Financial Officer Madhur Deora said on the call. Contribution margins jumped “with clear trends towards continued year-on-year improvements,” he said in the presentation that was later filed to stock exchanges.

Chief Executive Officer Vijay Shekhar Sharma highlighted the company’s ramp-up in the key segment of lending -- an important and fast-growing market in credit-starved India, where digital fintechs such as Paytm are serving millions of consumers and merchants.

“We are fully committed to head down and execute and deliver great results quarter-on-quarter, year-on-year forward on that,” Sharma said in his opening comments.

“It is in the growth phase so costs will remain high but it will have to draw a line on how much cash they can burn,” Bathini said. “It is a big brand and it is important they create synergies between businesses. It will have to ensure that productivity starts showing up in earnings going forward.”

Paytm raised $2.5 billion in its IPO but its debacle of a debut made it one of the worst initial showings by a major technology firm since the dot-com bubble era of the late 1990s.

“India has a large opportunity for credit and the scale-up can be huge from where we stand today,” said Bhavesh Gupta, head of the company’s lending division, on the Saturday call.  “Paytm is in both the consumer lending and merchant lending, we have a two-sided opportunity.”

“Lending and advertising in particular are contributing significant amount of high margin monetization,” Sharma said, even as he acknowledged competition in those businesses.

The company’s path to profitability could be through accelerating lending, commerce and cloud services as well as cutting down on marketing expenditure, said Anand Dama, head of research for banks and financial institutions at Emkay Global Financial Services. An expected moderation in the high-margin wallet business could lead to sustained pressure on revenue growth especially in the payments business, he said.