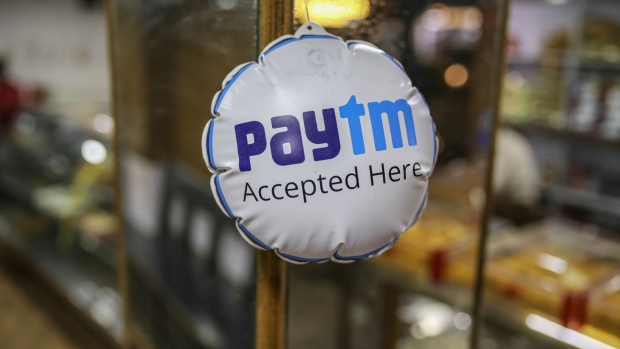 (Bloomberg) -- Indian digital payments company Paytm is seeking a valuation of about $20 billion when it opens its initial public offering next month, according to people familiar with the matter.

The float, which would be the country’s biggest IPO, will be priced in a band of 2,080-2,150, the people said, asking not to be identified as the information is private. Paytm aims to raise as much as 183 billion rupees ($2.4 billion) from the sale, some 10% more than its earlier target, according to its prospectus.

A Paytm representative declined to comment. Subscription runs Nov. 8-10 with the shares expected to start trading on or around Nov. 18. Several Indian technology startups -- many still burning cash but promising rapid growth -- have made an unprecedented beeline for the equity markets starting this summer. Food delivery company Zomato Ltd. raised $1.3 billion in July, while online beauty retailer Nykaa’s IPO is set to open Thursday. Others in the pipeline include insurance-seller Policybazaar and affordable lodging platform Oyo.

Paytm had been seeking a valuation of above $20 billion based on initial investor feedback, while advisers on the deal recommended a lower pricing, Bloomberg News had reported last week. The company was last valued at $16 billion, according to unicorn tracker CB Insights.

Formally called One97 Communications Ltd., Paytm, whose name is pronounced to rhyme with ATM, was founded in 2010 by Vijay Shekhar Sharma. Four years later, it moved into digital payments. Recently, it has focused on ramping up revenue and expanding into banking, credit cards, wealth management and all kinds of services ranging from selling digital gold, insurance and movie tickets.  Paytm has built the biggest share of India’s merchant payments market by fending off stiff competition from a swath of global players including Walmart Inc.-owned PhonePe, Alphabet Inc.’s Google Pay, Amazon Pay as well as Facebook Inc.-owned WhatsApp Pay.

Coal India Ltd.’s first-time share sale in 2010 totaling 155 billion rupees is the country’s largest IPO to date, but Paytm is set to break that record.

(Updates with details from company’s filing)