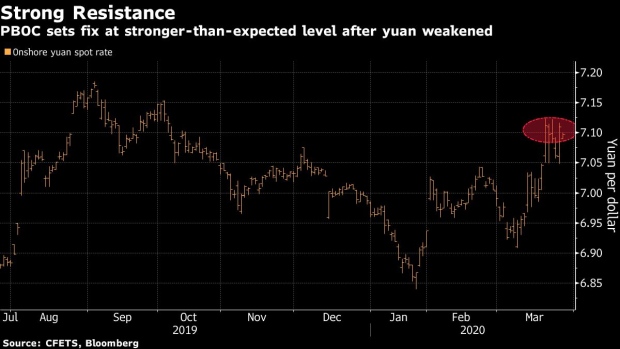 (Bloomberg) -- China set its daily reference rate for the yuan at a stronger-than-expected level Thursday, with the central bank perhaps signaling efforts to support the currency following recent weakness.

The PBOC put the fixing at 7.0692 yuan per dollar, 105 basis points stronger than the average forecast of analysts surveyed by Bloomberg. The spread is the most since Feb. 3, the first day of trading in China following a Lunar New Year break extended in response to the coronavirus. The fixing restricts the onshore yuan’s daily moves to 2% on either side of it.

Pressure on the yuan eased briefly following the central bank move. It was little changed as of 10:53 a.m. in Shanghai at 7.1082 per greenback after earlier strengthening as much as 0.28%. The yuan weakened 0.67% Wednesday, worst among emerging-market currencies tracked by Bloomberg, while most others rallied following unprecedented stimulus measures in the U.S. A report said the People’s Bank of China could cut its benchmark deposit rate in the coming days.

“The stronger fixing today could be a signal that the authorities do not want the yuan to weaken too far from here,” said Khoon Goh, head of Asia research at Australia & New Zealand Banking Group Ltd. “However, attempts to temper yuan weakness is probably more to dampen the volatility rather than to defend any particular level.”