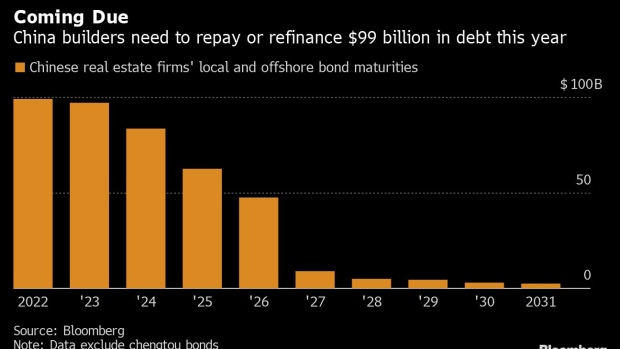 A worker sits in front of unfinished apartment buildings at the construction site of a China Evergrande Group development in Beijing, China, on Thursday, Jan. 6, 2022. Evergrande is seeking to delay an option for investors to demand early repayment on one of its yuan-denominated bonds, in the latest sign of distress amid a broader real estate debt crisis. , Bloomberg

Chinese sovereign bonds are poised to rally on the measures as fallout from the real estate sector puts pressure on Xi Jinping’s government to do more to insulate stronger developers and revive growth. Shinsun Holdings Group Co. became the latest developer to be downgraded.

China’s central bank pledged to use more monetary policy tools to spur the economy and ease credit stress as signs of a property market slump worsen.

The central bank will roll out more policies to stabilize economic growth, front-load actions and make preemptive moves, he said. It will address common concerns in the market in a timely manner and stay ahead of the market curve, he said.

A regional unit of Sunac China Holdings Ltd. has yet to return 30 million yuan ($4.7 million) of guarantee funds to Strongteam Decoration that was due Dec. 30, according to an exchange filing from Strongteam.

China’s sovereign yield curve is poised to bull steepen as the nation’s bonds extend an advance on expectations the central bank will continue cutting official rates while its global peers tighten policy.

Investors are positioning for the People’s Bank of China to lower rates further in the next few months after Monday’s decision to slice 10 basis points off its one-year policy loans -- the first reduction since April 2020 -- and to trim its seven-day reverse repurchase rate.

While the Federal Reserve is shifting its focus to heading off inflation, Chinese authorities are more concerned about propping up growth as they deal with the fallout from a crisis in the property market, weak private consumption and the risk of bigger coronavirus outbreaks. The PBOC is also expected to pump extra liquidity into the banking system before the Spring Festival holiday week starting Jan. 31.