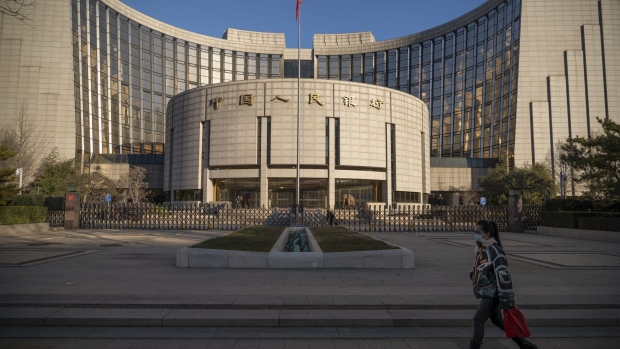 The People's Bank of China (PBOC) in Beijing, China, on Monday, Dec. 13, 2021. Economists predict China will start adding fiscal stimulus in early 2022 after the country’s top officials said their key goals for the coming year include counteracting growth pressures and stabilizing the economy. , Bloomberg

The People’s Bank of China reaffirmed it will focus on supporting small businesses and also sectors and groups hit by Covid outbreaks, and vowed to use various monetary policy tools to keep overall liquidity ample, according to its first-quarter monetary policy report published Monday.

Recent Covid outbreaks “have caused a greater impact on the economy,” the PBOC said in the report, noting that the consumption sector has weakened, companies’ output was lower and supply chain disruptions have increased. “We need to strengthen our confidence, take decisive actions and actively overcome the challenges,” it said.

Despite repeated pledges to support the economy and stabilize markets, the PBOC has been reluctant to adopt aggressive easing measures and has instead relied on new structural tools such as relending to provide financing help to targeted sectors. Investors were disappointed by its measured approach after it refrained since January from cutting policy interest rates and only provided a modest cash boost to banks in April.

The PBOC also indicated it welcomed a relaxation of cities’ property controls, saying it supports authorities setting policy based on local conditions to meet demand from first- and second-time homebuyers.

The weighted average deposit rates declined by 10 basis points to 2.37% in the last week of April, the report said, noting that the PBOC gave unspecified rewards to banks which adjusted their rates in a timely manner. Bloomberg reported mid-April that the PBOC had urged banks to cut the rates, citing people familiar with the matter. A cut would help help lower banks’ funding costs.

The central bank reiterated it will keep a close watch on inflation and support the supply of grain and energy in order to keep prices stable overall. It will also monitor the changes in advanced economies’ monetary policy, with the aim of achieving internal and external balance while setting its own agenda.