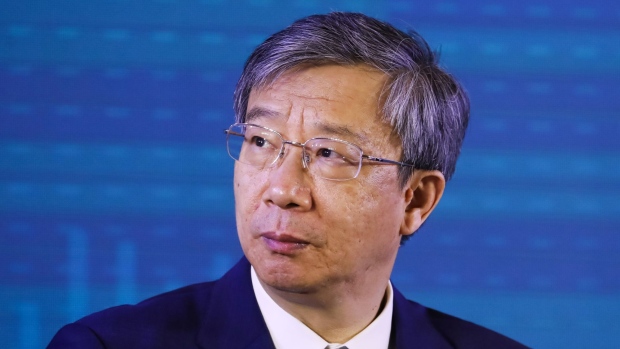 Yi Gang, governor of the People's Bank of China (PBOC), looks on at the International Monetary Fund (IMF) and World Bank Group Annual Meetings in Nusa Dua, Bali, Indonesia, on Sunday, Oct. 14, 2018. Yi said the nation is seeking to solve trade tensions with the U.S. constructively and will continue to open up its services industry, especially the finance sector. , Bloomberg

The property developer’s trouble “casts a little bit of concern,” Yi said at a virtual meeting of the Group of 30 on Sunday. “Overall, we can contain the Evergrande risk.”

Concerns have grown that the cash crunch at Evergrande is spilling over to other developers as President Xi Jinping maintains strict measures to cool the property market.

On Friday, PBOC official Zou Lan said that authorities and local governments are resolving the situation based on “market-oriented and rule-of-law principles.”

Yi said Evergrande’s liabilities were spread across “hundreds” of entities in the financial system so that there is “not much concentration.”

“The rights and interests of creditors and shareholders will be fully respected in strict accordance with the law. And also the law has clearly indicated the seniority of those liabilities,” he said.

Beijing is also trying to protect consumers and homebuyers, he said.

“I think we can prevent systemic risk,” he said, by keeping risk contained.

Without mentioning Evergrande, Yi said earlier that higher default risk for some firms due to “mismanagement and breakneck expansion” was slowing China’s economy.

Yi predicted producer price inflation will start slowing by the end of this year after accelerating at the fastest pace in almost 26 years in September.

The producer price index will “remain high for a few months, before the upward pressure wanes at the end of this year,” Yi said. “Consumer price index growth remains moderate.”

The index in September climbed 10.7% from a year earlier, beating forecasts and reaching the highest since November 1995. Yi said the advance was “largely explained” by rising raw material costs.

Yi said the coronavirus pandemic is “under control” in China, and that the economy is returning to “business as usual,” albeit with its growth easing lately.

He predicted economic expansion of about 8% for the whole year. A report on Monday is set to show gross domestic product slowed to 5% in the third quarter from 7.9% in the previous three months, according to the median forecast of economists surveyed by Bloomberg.

“The growth momentum has moderated somewhat,” Yi said. “Economic growth has been slowed down a little, but the trajectory of the economic recovery remains unchanged.”

“The Chinese economy is doing well in general, but we still face some challenges,” he said. “We are keeping a close eye on all these problems.”