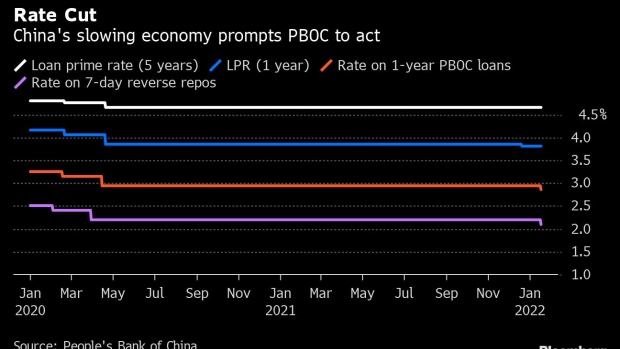 (Bloomberg) -- China’s cut of two key policy interest rates opens the door to more monetary easing actions ahead, even though the U.S. will probably hike rates from March, economists say.

The People’s Bank of China is expected to allow banks to cut the loan prime rate -- the de facto benchmark lending rate -- when it’s announced Thursday, following the first reduction of the one-year medium-term lending facility rate and the seven-day reverse repurchase rate in almost two years. The one-year tenor was already lowered by 5 basis points last month, and all eyes are on whether the five-year rate will decline to allow for cheaper mortgages.

Economists also forecast further policy interest rate cuts and reduction to the reserve requirement ratio, or the amount of cash banks must set aside in central bank reserves, as the economy is set to be tested by spreading outbreaks of the omicron variant, a decelerating property sector and sluggish consumer sentiment.

Here’s a summary of what more monetary easing steps economists expect to come:

“We see a decent possibility for the five-year loan prime rate to be cut by 5 basis points” when it’s announced Thursday, the economists said in a note Monday. The five-year rate is the reference for mortgages and a cut “would send a signal on broad property policy easing,” they wrote.

The PBOC will also likely cut the RRR by 50 basis points at some point to support the economy, they wrote. Strong foreign capital inflows may continue due to elevated goods trade surplus and foreign buying of yuan assets, and yuan depreciation and capital outflow pressures remain low, according to the economists.

“This also implies room for PBOC to ease further despite U.S. monetary policy tightening this year,” they said.

There’s still room for China to cut interest rates further even though the Fed is likely to hike rates later this year, because the rate differential remains wide, Pang said.

She forecasts the PBOC will cut the one-year MLF rate by 25 basis points in each quarter starting from the second quarter, amounting to another 75 basis points in total by the end of this year.

“Further RRR cuts will depend on how big an impact the omicron variant will have on economy during the Lunar New Year,” said Pang. “The PBOC could also use the daily open-market operation injections to replace RRR cuts.”

The PBOC chose to cut the MLF rate Monday instead of last month partly to protect commercial banks’ profit margins, according to Lu, as mortgage rates are reset on Jan. 1 every year. The economic slowdown and the property downturn is already set to hit banks’ profitability, he said.

“The space left for future rate cuts this year is quite small,” he wrote in a note. “We expect another 10 basis point rate cut before mid-2022.”

The PBOC could choose to increase foreign exchange purchases significantly in the coming months, Lu said. This would contain the yuan’s appreciation, ease concerns over Chinese companies’ offshore dollar bond defaults, and add liquidity to the economy, according to Lu.

The cut in the seven-day reverse repo rate “reflects policy makers’ strong intention to stabilize GDP growth preemptively,” said Xing. Another RRR cut is possible as the PBOC acts to prevent a market rout caused by developers’ defaults, according to Xing.

But the window for monetary easing will be limited as the Fed looks ready to start hiking soon, after which the PBOC will pull back and focus on financial stability later this year, Xing said.

The PBOC’s rate cuts “sends a strong signal that stabilizing economic growth has become the priority,” said Chen, who expects another cut of the one-year MLF rate by 5 basis points in April or May.

He forecast a 50 basis point reduction in the RRR in the first quarter and another cut in the second half of the year, even though the Fed’s potential rate hike could narrow the PBOC’s easing window.

“This is a decisive dovish tilt as the policymakers acknowledged the importance to stabilize short term growth,” said Liu.

Liu expects the PBOC to cut the one-year MLF rate by another 20 basis points and the RRR by 100 basis points by the end of the year. However,  the PBOC is “unlikely resort to ‘flood-style stimulus’ of consecutive and aggressive rate cuts,” she said.

The PBOC to cut policy rates by another 20 basis points in the first half of this year as economic momentum remains weak, according to Evans-Pritchard.

“We think policymakers will keep quantitative constraints on lending relatively tight, allowing for only a modest pick-up in credit growth,” he said in a note. “The upshot is that policy easing is likely to soften the economic downturn rather than drive a rebound.”

The PBOC’s policy rate cuts “are very much needed now to shore up business expectations and credit demand,” said Chen in a note. “We expect more policy easing to come in the coming months, including two 50 basis-point across-the-board reserve requirement ratio cuts and a larger fiscal bill to support manufacturing, infrastructure and green investment this year.”