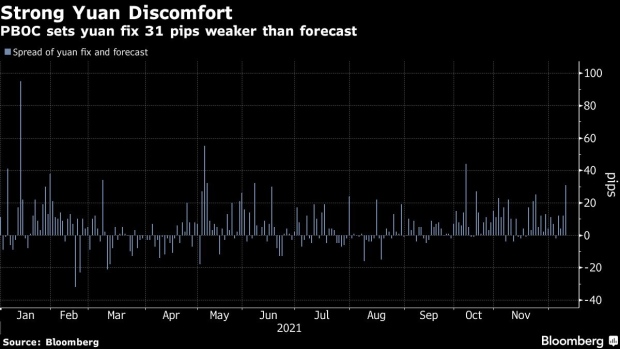 (Bloomberg) -- China’s central bank set its reference rate for the yuan at a weaker-than-expected level against the dollar, signaling its discomfort with currency’s advance to the highest since 2018.

The People’s Bank of China set its daily yuan fixing at 6.3498 per dollar, weaker than the average estimate of 6.3467 in a Bloomberg survey of analysts and traders. The reference rate came in slightly lower-than-expected in the last three days.

China’s yuan climbed to its highest since May 2018 on Wednesday amid bets that the PBOC’s monetary stimulus will sustain the nation’s growth and that the new Covid variant will have a limited impact on the global recovery.

However, the recent gains are likely testing the tolerance of China’s central bank that has so far maintained a hands-off approach toward the currency, that’s set to become Asia’s best performer this year with 2.9% gains.

The country’s top securities papers reiterated Thursday that the currency continues to fluctuate both ways. The yuan would continue its appreciation against the greenback over the short term due to China’s strong exports, fund inflows and a stable monetary policy, China Securities Journal said in a front-page report, citing analysts.