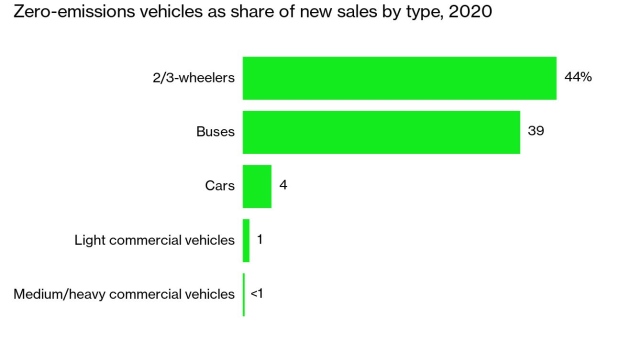 Vehicles drive in light traffic on the Judge Harry Pregerson Interchange between the 105 and 110 freeways in this aerial photograph taken above Los Angeles, California, U.S., on Friday, May 1, 2020. California Governor Gavin Newsom is directing departments to cut spending immediately amid projected deficits of $35 billion, while Los Angeles Mayor Eric Garcetti proposed a budget that calls for civilian workers to take 26 furlough days during the fiscal year that begins in July. Photographer: Patrick T. Fallon/Bloomberg , Bloomberg

(Bloomberg) -- The world hit a transport milestone in 2017, though most people wouldn’t have noticed it at the time.

That year, consumers bought more than 85 million automobiles, a sales volume that declined in 2018, and again in 2019, and then plummeted in 2020 due to Covid-19. Meanwhile, sales of electric vehicles rose, and rose again, making EVs the auto industry’s only growth market—and meaning that we almost certainly hit peak internal combustion engine car sales four years ago.

The future looks even more electric, according to BloombergNEF’s annual Electric Vehicle Outlook. (My colleague Colin McKerracher wrote his highlights for Hyperdrive yesterday.) The report is full of bold conclusions. For one, it sees mostly electric vehicles sold by the 2030s and mostly electric vehicles on the road by the 2040s—and that’s just the business as usual scenario. In a net-zero emissions world, EVs would comprise 100% of passenger vehicle sales just 15 years from now, with all other classes of road vehicle—from two-wheelers to heavy commercial trucks—being either fully electric or fuel cell-powered by the early 2040s.

Creating this sort of scenario is important in our current moment, when more and more businesses are committing themselves to a net zero path. Also important: describing where we are right now.

Electric cars get a lot of attention, but they’re only one type of now-electrified road vehicle. Last year, EVs were more than 4% of total passenger car sales and 1% of the commercial vehicle market, at most. Meanwhile, electrics were 44% of electric two- and three-wheeler sales, and 39% of bus sales. As efficient as modern car factories are, they won’t be able to keep pace with an e-scooter factory targeting 10 million units a year.

Passenger cars have a long way to go to catch up. That said, I don’t want to minimize the rate of change so far. Total new car sales value last year exceeded $2 trillion, even with a massive overall sales drop-off. EVs are already a $100 billion-plus annual business, with a striking growth rate.

In 2011, EVs were 0.1% of total passenger car sales, but BNEF thinks they could be 10% of sales by 2023, a 100-fold increase in a little over a dozen years. I’m fond of thinking of fast-growing markets in exponential, not linear terms, and once EVs pass 10% of sales, they’re in the last exponent of the passenger car market. At that point they’re playing not for a slice of the market, but for all of it.

It’s worth thinking about the coming growth in passenger car EVs from a company’s perspective. A raft of new models are coming, many from century-old automakers. Some of them are old branding on new vehicle types, such as Ford Motor Co’s Mustang Mach-E, which is already being manufactured more than its combustion engine sports coupe namesake.

But more of the incipient EVs are comparable to existing internal combustion models. I’m thinking in particular of the best-selling vehicle in the U.S. for the past four decades, the F-150, and its electrified doppelgänger, the F-150 Lightning. Once it hits the market next spring, a few things could happen: it could eat into regular F-150 sales; it could eat into other manufacturers’ full-size truck sales; or it could absorb sales from other vehicle classes—say, SUVs.

We already have data on how one company’s comparable models with different powertrains might evolve on the sales front: Porsche. Porsche doesn’t have many models—most have been sold for years or decades—therefore its new introductions are potentially in competition with its existing offerings. Porsche sells two internal combustion SUV models (one of which is available as a hybrid), and now two sedans: the combustion (and hybrid) Panamera, and the all-electric Taycan.

Porsche has managed to grow its sedan market with a new model, but the competition between its incumbent and its new entrant is also crystal clear. The electric Taycan could push its combustion-engine sibling to the brink—too small a market to be worth a model refresh. It’s a competition, in miniature, that the global auto market will soon face across the board. All of its growth is electric, and at a certain point, that growth comes at the expense of combustion engine sales.