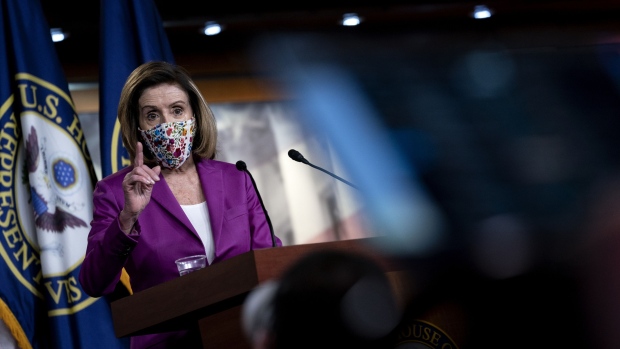 U.S. House Speaker Nancy Pelosi, a Democrat from California, speaks during a news conference at the U.S. Capitol in Washington, D.C., U.S., on Thursday, Jan. 7, 2021. Pelosi�joined Senate Democratic leader�Chuck Schumer�in calling for the removal of President�Donald Trump�in the wake of what many lawmakers from both sides of the aisle said was his incitement of the mob that stormed the Capitol. Photographer: Stefani Reynolds/Bloomberg , Photographer: Stefani Reynolds/Bloomberg

(Bloomberg) -- House Speaker Nancy Pelosi backed a move to put a repeal of the $10,000 cap on state and local tax deductions in the infrastructure and social-spending program that Democrats are hoping to pass as soon as this summer.

“Hopefully we can get it into the bill. I never give up hope for something like that,” Pelosi said at a press briefing Thursday.

She called the deduction limit enacted by President Donald Trump “devastating” to taxpayers in her home state of California, and said she is sympathetic to the move by a group of lawmakers to remove the cap in any tax legislation that is part of President Joe Biden’s long-term economic plan.

The $10,000 limitation on state and local tax, or SALT, deductions is a prime focus for several Democrats in Congress, including New Jersey Representatives Bill Pascrell, Josh Gottheimer, Mikie Sherrill and New York Representative Tom Suozzi. All four lawmakers -- who are sufficient in number to block the bill if all Republicans stay united against it -- have said they won’t back any other tax-code changes to fund an infrastructure bill unless it addresses the SALT cap.

“I cheer the exuberance on the subject of the SALT tax,” said Pelosi, who said the cap was “was mean-spirited” and “politically targeted” to begin with. “I’m sympathetic to their position,” she said, while holding off on making a call on how to vote until the overall legislation is set.

Biden released an outline for a $2.25 trillion infrastructure-focused proposal this week paid for by corporate tax increases. He is set to release a second plan later this month focusing on social programs paid for by tax increases on individuals.

The lawmakers pushing for a repeal of the $10,000 SALT limit say it has hurt residents of districts with high costs of living and high state and local levies -- by removing a substantial deduction on their federal taxes.

Removing the cap, which would cost the federal government tax revenue, could become a key area of contention as Democrats seek to raise levies on corporations and the wealthy to pay for a bevy of infrastructure, health care and social programs. In addition to costing $88.7 billion a year -- revenue that some Democrats would like to direct elsewhere -- doing away with the SALT cap is a politically difficult issue for some members of Congress, because more than half the benefits flow to households earning more than $1 million a year, according to the Joint Committee on Taxation.