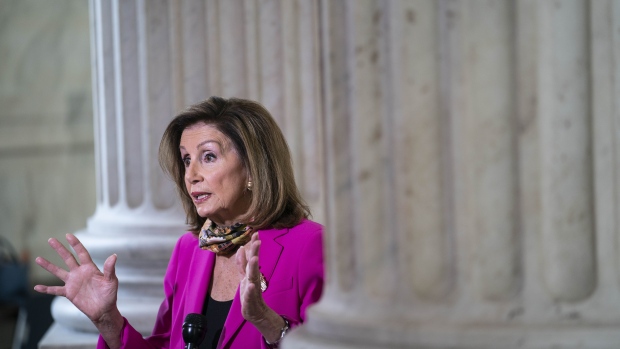 A last-ditch attempt by Democrats and the White House to restart negotiations on a new stimulus drew skepticism in Congress that a deal could be reached and written into law by Election Day.

Both sides had largely given up on stimulus talks after a weeks-long stalemate, even amid signs of strain in financial markets. But Thursday brought a flurry of activity that suggested movement on virus relief efforts as the clock runs out for Congress.

House Speaker Nancy Pelosi and Treasury Secretary Steven Mnuchin expressed willingness Thursday to resume talks that broke off in August. Separately, House Democrats started work on what would be a roughly US$2.4 trillion stimulus proposal that they could take into negotiations.

The new Democratic plan is roughly in line with the last offer made by Pelosi and Senate Democratic leader Chuck Schumer to Mnuchin and White House Chief of Staff Mark Meadows, which the administration rejected. Smaller than the US$3.4 trillion package the House passed in May, it’s still more than the US$1.5 trillion U.S. President Donald Trump has indicated he would accept, and much bigger than the US$650 billion in new spending supported by Senate Republicans.

Texas Representative Kevin Brady, the top Republican on the tax writing committee, called the move to draft a Democrat-only bill “a waste of time.”

“It doesn’t get us an inch closer,” Brady said.

Even if a deal can’t be done by Election Day, some Democrats held out hope of passing a stimulus bill during the lame-duck session after the election, arguing that if Republicans lose control of the Senate they may be less concerned about winning the political argument about holding the line on spending.

Word from Pelosi and Mnuchin that they were willing to talk provided a brief boost to markets in the middle of the session Thursday. Yet the S&P 500 Index pared most of its advance as it became clear the two sides remained far apart on the size of stimulus needed.

The Democratic plan adds to the previous US$2.2 trillion Pelosi-Schumer plan, with help for the U.S. airline industry to avert massive job losses -- which could start Oct. 1, when restrictions expire from a prior round of federal assistance. Also included is small-business aid and a bailout for restaurants.

Although some Democrats portrayed it as an opening to an eventual deal, members of both parties were pessimistic as the legislative clock ticks down. The Senate is planning to leave Washington for a month of campaigning after work next week, with the possible exception of a vote on a Supreme Court nomination. The House is also planning to leave, and be on standby for members to return in case of a stimulus vote.

“I would say right now we are in a difficult spot as far as getting something done,” Senate Banking Chairman Mike Crapo, an Idaho Republican, said.

Democratic Senator Ben Cardin of Maryland said, “I don’t think we are going to get it done before whatever break we have before the elections.” Republicans are “underestimating” the danger to the economy and are unlikely to accept a significant stimulus, he added.

Lawmakers and the White House have had plenty of warnings about what a failure to act might mean to the U.S. Economy.

Initial claims for unemployment insurance remained at a level above the peak during the Great Recession of 2007-09, the latest weekly data showed on Thursday.

Federal Reserve Chairman Jerome Powell reiterated his conclusion that “it’s likely that additional fiscal support will be needed,” speaking at a Senate panel where Mnuchin was also testifying Thursday.

The recovery has been faster than anticipated so far, Powell said, thanks to income support to those affected by the pandemic.

“The risk is that they’ll go through that money, ultimately, and have to cut back on spending and maybe lose their home,” the Fed chief said. “That’s the downside risk of no further action.”

The Democratic plan could get a vote next week, though officials said no decisions have been on whether to bring it to the floor.

House Majority Leader Steny Hoyer said Thursday that the main focus remains on getting a deal with Mnuchin and the Senate before Congress is adjourned.

“A message bill is one thing but we want to get something signed so people get money,” he said.

Pelosi has been under pressure for weeks to come up with another stimulus plan from restive House Democrats facing reelection in closely divided districts. About a dozen moderate Democrats this week began threatening to mutiny and back a Republican procedural move to force a House floor vote on small-business relief.

Democratic Representatives Josh Gottheimer, Dean Phillips and Abigail Spanberger, who all represent swing districts, were seeking signatures on a letter to leadership opposing the Republican discharge petition but stating “it is essential that we send the Senate a compromise bill before the election that is reasonable and that can be signed into law by the president of the United States."