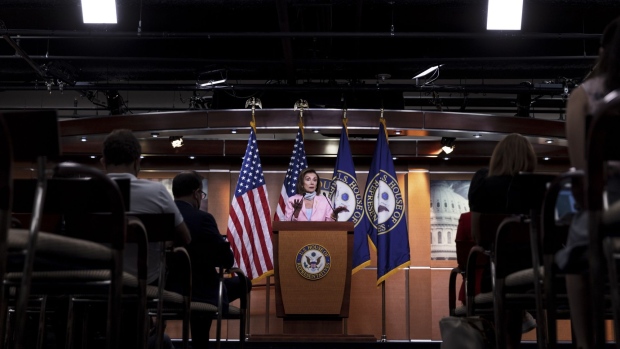 (Bloomberg) -- The fate of President Joe Biden’s economic agenda rests largely on Speaker Nancy Pelosi navigating deep Democratic rifts and the minefield of promises she’s made to keep the party’s moderate and progressive wings moving toward her goal.

The California Democrat, who has only three votes to spare on any party-line votes, has a jam-packed September agenda that includes action on a multi-trillion dollar tax and spending bill as well averting both a politically disastrous government shutdown and a potentially catastrophic Treasury default.

How she manages the stream of consequential legislation and the competing demands within her own party could come to define Biden’s presidency and what may be her last term as speaker. The emerging strategy, to be carried out over the next two weeks, is as risky as it is high-stakes.

Pelosi and her team are, for now, sticking to a commitment to emboldened centrists to hold a vote by Sept. 27 on the portion of Biden’s agenda already passed by the Senate that would deliver $550 billion in new infrastructure spending. That comes at the heavy price of breaking an earlier promise to progressives that she would hold up the public works bill until the Senate passes the larger package of as much at $3.5 trillion for social, climate and other programs.

The prospects of House and Senate passage of the broader bill before Sept. 27 are bleak given lingering disagreements among Democrats in both chambers on some key parts of Biden’s agenda.

Pelosi plans a House vote before Oct. 1 on the tax and spending package, but that timeframe won’t appease progressives who have threatened to oppose the infrastructure bill if it jumps the line for a floor vote.

Congressional Progressive Caucus Chairwoman Pramila Jayapal said Friday she reiterated to Democratic leaders that progressives would vote against the infrastructure bill unless the Senate and House have already passed the $3.5 trillion reconciliation bill

“It won’t have sufficient votes to pass the House,” she predicted.

There now is serious concern among Pelosi and other top House Democratic leaders they will not have enough votes to pass the infrastructure bill on Sept. 27 unless the reconciliation bill moves at the same time, said one senior Democratic aide.

But that can’t happen unless the House and Senate moves quickly settle on the size and scope of the tax and spending package and until the Senate parliamentarian finishes determining what qualifies to be in the bill. On Sunday, the parliamentarian issued an opinion that the Democrats can’t include a sweeping immigration overhaul in the legislation. That may harden demands from liberals to pass the full $3.5 trillion package.

It’s a complicated juggling act for Pelosi. The timing of the vote on the larger package puts moderates in swing states -- the same lawmakers she looked to reassure with the infrastructure vote -- in a precarious position.

Many party centrists, eyeing tough re-election bids, don’t want to have to cast a politically difficult vote on a massive spending package unless Senate Democrats are fully on board. On Friday, nine of them wrote a letter reaffirming that she must stay the course on the Sept. 27 vote.

House Budget Committee Chair John Yarmuth suggested on Sunday that the House could take the infrastructure vote but hold off transmitting the legislation to the Biden for his signature until more progress is made on the bigger tax and spending plan.

“There’s some flexibility in how we mesh the two mandates,” he said on the “Fox News Sunday” program.

Pelosi is betting House passage of the larger package could give her leverage in talks with conservative Democrats Joe Manchin of West Virginia and Kyrsten Sinema of Arizona who continue to oppose the bill’s $3.5 trillion cost. Manchin has called for Democrats to take a pause on the massive package.

Biden last week made a personal appeal to both senators, who have suggested they would only support a scaled-back package, but it’s not clear he swayed them. And House moderates don’t want to take a chance of the package failing in the evenly divided Senate.

“We ought to know first how much money we are going to invest and the Senate is going to tell us that, and then let’s all make choices together about what our priorities are,” Representative Scott Peters, a moderate Democrat from California, said Thursday on Bloomberg Radio. “We already know as we sit here today that the bill is not going to be $3.5 trillion. Any one senator can cut that number.”

Republicans are doing what they can to put political pressure on centrists to shrink the bill and its tax increases.

“We are focused on those 16 moderates or so in the House who go back to their districts and run as main street moderates and who the U.S. Chamber has endorsed to make sure their constituencies understand just how damaging these tax hikes are,” he said. “We are starting to see some progress there.”

Pelosi’s problems aren’t all of the scheduling and price tag variety. There are lingering disagreements over specific policies, including drug prices and the state and local tax deduction.

Three moderates blocked Democrats’ drug price negotiation proposal from advancing out of the Energy and Commerce Committee last week. The moderates won that battle, but eliminating that revenue-generating proposal makes it all the more difficult to meet a key centrist demand: that the plan be fully paid for.

Peters, who voted no in committee, argued that the stiff penalties imposed by the bill on drug-makers that do not lower their prices would stifle innovation. He has proposed an alternative that limits Medicare’s ability to negotiate prices and means-tests caps on out of pocket costs.

The Peters bill is estimated to raise about $200 billion for other spending rather than roughly $600 billion from the Medicare negotiation bill backed by House leaders.

Lawmakers from high-tax states such as New York, New Jersey and California continue to demand repeal of the $10,000 cap on the state and local tax deduction, or SALT, enacted as part of the 2017 Trump tax bill.

Progressives, including Representative Alexandria Ocasio-Cortez of New York, oppose a complete repeal of the cap. But in a positive sign of a possible deal, they are increasingly open to allowing a larger deduction.

Jayapal and the progressive caucus are still pushing for changes to the House bill as it has emerged from committee. They want to add a reduced Medicare eligibility age of 62, a one-time wealth tax on billionaires, a removal of fossil fuel subsidies and the addition of other climate change provisions.

There are growing worries among moderates that the House committees have endorsed spending in excess of the $3.5 trillion budget top-line already envisioned.  The non-partisan Congressional Budget Office has not yet scored all the spending provisions, but the $1.2 trillion in tax credits alone used up more than half of the $2.1 trillion in new revenue approved by the tax-writing committee.

One person familiar with the bill predicted the true price tag is closer to $4.5 trillion, which would force tough negotiations over cuts before it can come to the floor.

While the battle over the core Biden agenda plays out, the House is planning to bring a bill keeping the government open through Dec. 3 to the floor for a vote as well as a suspension of the $28 trillion debt ceiling.

Senate Republicans have said they will not support the debt ceiling bill, all but ensuring it will be blocked in the Senate and lead to more congressional drama ahead of a possible October U.S. payments default.