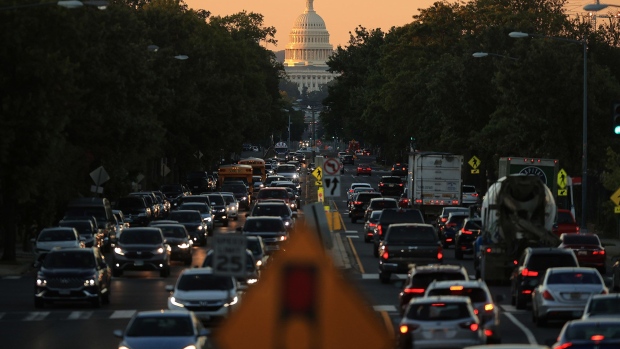 WASHINGTON, DC - SEPTEMBER 30: Sunrise hits the U.S. Capitol dome on September 30, 2021 in Washington, DC. Congress is facing a partial federal government shutdown at midnight if the House and Senate can not pass an extension of the current budget. (Photo by Chip Somodevilla/Getty Images) , Photographer: Chip Somodevilla/Getty Images North America

(Bloomberg) -- Speaker Nancy Pelosi opened the door to Democrats using a special budget tool to raise the U.S. debt ceiling without the support of Senate Republicans, whose votes would otherwise be needed to end a filibuster on the increase.

Democrats this month resisted using the budget reconciliation process, which requires just 51 votes to pass fiscal legislation, to extend the debt ceiling when the country faced the brink of missing payment obligations. The majority party argued that using that process, which can eat up weeks of Senate floor time, sets a bad precedent given that both parties approved past spending that has led to federal debt.

Pelosi indicated a shift when asked about using reconciliation on CNN’s “State of the Union” on Sunday.

“That’s one path, but we’re still hoping to get bipartisanship,” she said.

Instead of a separate budget bill dealing only with the debt ceiling, Democrats may be in a better position to add a provision to the tax-and-spending measure they’re ramming through Congress using the budget process. Democrats are now much closer to a deal on an approximately $2 trillion social safety-net bill, and could through a budget amendment tie a debt ceiling increase to that bill.

Under Senate rules, the bill would likely have to specify a dollar amount of debt rather than suspend the ceiling to a certain date. Some lawmakers may have political qualms about voting for such a provision since Republican opponents are sure to use it in the 2022 midterm elections campaign.

Treasury Secretary Janet Yellen reiterated her warnings about failing to raise the debt ceiling and said she views it as a shared responsibility of both parties.

Failure to raise the debt limit would be “utterly catastrophic,” she said in a separate interview on CNN.

Pelosi said Democrats are also looking at ways to abolish or circumvent the debt ceiling permanently. Those proposals appear less likely to succeed given the need to attract Republican votes in the Senate to pass.

Republicans backed down and agreed to support a short-term debt ceiling suspension through at least Dec. 3 to give Democrats more time to use the cumbersome budget process to enact a longer-term increase.

Senate Minority Leader Mitch McConnell and other Republicans who voted for the short-term suspension have said they will not vote for another bill, having given Democrats weeks to tackle the debt ceiling on their own.

Treasury may be able to use extraordinary accounting measures to stave off default to January or February, creating a much later deadline for Congress to act.