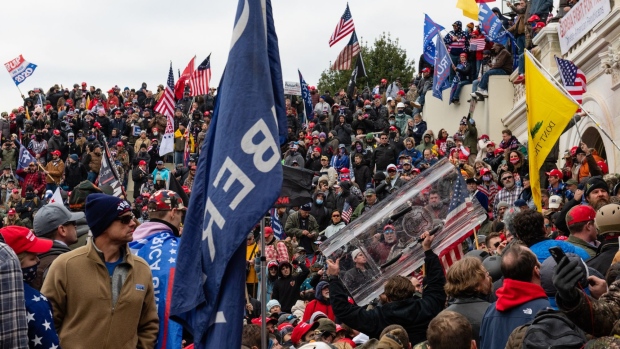 Demonstrators steal a Metropolitan Police riot shield outside the U.S. Capitol building during a protest in Washington, D.C., U.S., on Wednesday, Jan. 6, 2021. The U.S. Capitol was placed under lockdown and Vice President Mike Pence left the floor of Congress as hundreds of Demonstrators swarmed past barricades surrounding the building where lawmakers were debating Joe Biden's victory in the Electoral College. Photographer: Eric Lee/Bloomberg , Bloomberg

“That would be my plan,” Pelosi said Sunday on ABC’s “This Week” of appointing Kinzinger, and perhaps other Republicans, but said she first has to speak to Kinzinger.

“He and other Republicans have expressed an interest to serve” on the panel, she said, despite Minority Leader Kevin McCarthy on Wednesday pulling all five of his own Republican picks when Pelosi vetoed two of them.

Pelosi has already named Republican Liz Cheney of Wyoming to the panel, which is set to have its first public hearing on Tuesday.

Cheney and Kinzinger were among the 10 House Republicans who voted to impeach then-President Donald Trump for his encouragement of the mob that marched on Capitol Hill and disrupted the certification of Joe Biden’s victory in the 2020 presidential election.

Cheney later lost her post as the No. 3 House GOP leader after she continued to call out Trump for his ongoing falsehoods about the election.

A retired Air Force pilot whose missions took him to Afghanistan and Iraq, Kinzinger, 43, has been in Congress since 2011. He continues to serve in the Air National Guard.

Created to have 13 members, the committee now consists of seven Democrats and Cheney. On Tuesday it will hear from officers from the U.S. Capitol Police and the District of Columbia’s Metropolitan Police Department force about their struggles during the attack.

The House passed legislation to form the committee after Senate Republicans filibustered the creation of an independent, bipartisan commission patterned after the one that investigated the 9/11 attacks.

Pelosi and McCarthy have traded barbs over the committee’s lopsided-roster and its value to the public.

”The idea that she’s going to pick and choose -- you’re not going to get an outcome,” McCarthy complained to reporters Thursday. “This is a sham committee that’s just politically driven by Speaker Pelosi.”

Pelosi, at a separate press conference, called the committee’s work “deadly serious” and insisted it is bipartisan. She also pointed out that it was Republican lawmakers who had opposed and blocked the independent outside commission.

“It’s my responsibility as speaker of the House, to make sure we get to the truth on this, and we will not let their antics stand in the way of that,” she added.

“We’re there to get the truth, not to get Trump,” she said, referring to some Republican claims that the former president is the committee’s real target. She explained that she had rejected two Republicans chosen by McCarthy, Jim Banks of Indiana and Jim Jordan of Ohio, because “they have made statements and taken action I think that would impact the integrity of the committee, the work of the committee.”

Banks said on Sunday that Pelosi’s rejection was aimed at limiting the scope of the investigation.

“It’s more clear than ever that Nancy Pelosi is not interested in an investigation,” Banks said on “Fox News Sunday.” “She’s only interested in a narrative.”

He repeated that it’s important to ask why the Capitol was not protected properly. “Why was there a a systemic breakdown of security at the Capitol on January 6?”

Trump, who continues to perpetuate the falsehood that the November election was stolen, has vowed revenge against the Republicans who voted for his impeachment and encouraged primary challenges against them.