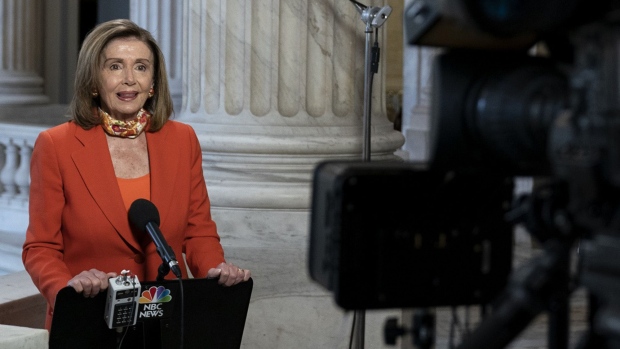 (Bloomberg) -- Speaker Nancy Pelosi rejected calls from some House Democratic moderates to hold a vote on a new, smaller stimulus bill and doubled down on her push to get the White House to agree to a $2.2 trillion package.

The House last moved on coronavirus relief in May -- passing the $3.4 trillion Heroes Act that died in the Senate -- and members of the moderate New Democrat Coalition have privately pushed for a vote on a bill reflecting a $2.2 trillion offer Pelosi has made to the White House.

“What we want is to put something on the floor that will become law,” Pelosi said on MSNBC Wednesday. She said some members want her to agree to a re-vote on the Heroes Act to stand firm, something she also rejected.

White House Press Secretary Kayleigh McEnany said Wednesday that President Donald Trump wants to get a stimulus deal and it is Pelosi who has been “fundamentally unserious.”

Centrists in the Problem Solvers Caucus, which includes 25 Democrats, on Tuesday backed a $1.5 trillion compromise plan that would automatically rise to $2 trillion if the pandemic persists. Pelosi also rebuffed this idea.

“We did come down,” she said of her willingness to compromise. “We can only go so far.”

The speaker downplayed the divisions in her caucus, which have erupted on a series of conference calls in recent days, saying she is used to building consensus in a diverse group of Democrats.

Pelosi said the White House is only interested in approving $1,200 stimulus checks to go out with Trump’s name on it ahead of the election, but that ignores a range of needs of the American people including food and housing needs.

“It isn’t about finger pointing and it isn’t about machinations. It is about meeting the needs of the American people,” she said. “”Right now we need to do more that have Republicans check a box”