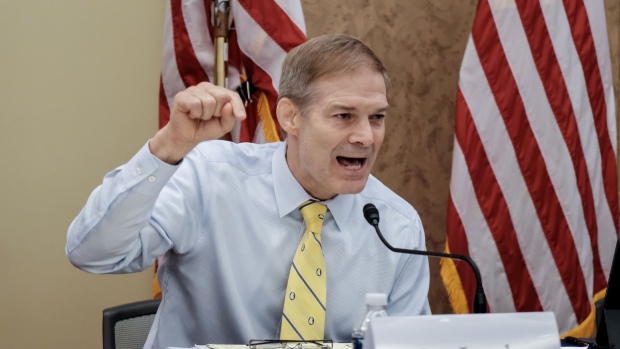 U.S. House Speaker Nancy Pelosi, a Democrat from California, speaks during a news conference at the U.S. Capitol in Washington, D.C., U.S., on Thursday, July 1, 2021. The House passed a Democratic bill yesterday creating a 13-member committee to investigate the Jan. 6 attack on the Capitol. , Bloomberg

(Bloomberg) -- House Speaker Nancy Pelosi rejected the selection of Republican Representatives Jim Jordan and Jim Banks for a select committee that will investigate the Jan. 6 insurrection at the U.S. Capitol.

Pelosi, who has final say over the 13-member committee’s composition, said she informed House GOP leader Kevin McCarthy she wouldn’t accept his recommendation that Jordan and Banks join the panel and requested he select two new members.

“With respect for the integrity of the investigation, with an insistence on the truth and with concern about statements made and actions taken by these members, I must reject the recommendations of Representatives Banks and Jordan to the Select Committee,” Pelosi said in a statement. “The unprecedented nature of January 6th demands this unprecedented decision.”

There was no immediate response from McCarthy or from Banks and Jordan, two vocal supporters of former President Donald Trump who voted to challenge certification of President Joe Biden’s Electoral College victory on the day of the attack on the Capitol.

Pelosi said she is prepared to appoint Republican Representatives Rodney Davis of Illinois, Kelly Armstrong of North Dakota and Troy Nehls of Texas. Nehls and Davis refused to comment as they arrived at McCarthy’s office after Pelosi’s announcement.

McCarthy and others in the GOP had already cast the select committee’s creation as a political tool for Democrats to go after Republicans and Trump, and Pelosi’s action is sure to exacerbate that.

Banks, who would have been the ranking Republican on the panel, said in a statement earlier this week that Pelosi “created this committee solely to malign conservatives and to justify the Left’s authoritarian agenda.”

Pelosi has already named her eight choices to the panel, including Representative Bennie Thompson of Mississippi as the chairman. She has included one Republican, Liz Cheney of Wyoming, to serve. The committee’s first meeting is scheduled for next week.

Pelosi moved to create the select committee to investigate the insurrection by supporters of Trump after Senate Republicans blocked creation of an independent commission to conduct an inquiry. The violence unfolded as both chambers were meeting to certify electoral votes in the 2020 presidential election.