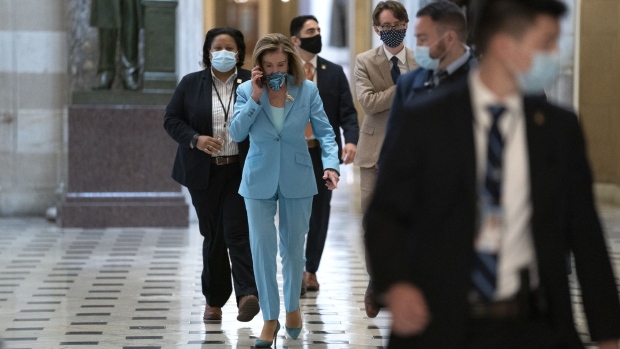 Nancy Pelosi speaks on the phone as she walks through the U.S. Capitol in Washington, D.C. on Sept. 15. , Bloomberg

(Bloomberg) -- House Speaker Nancy Pelosi said Congress should stay in session until lawmakers and the White House get an agreement on another stimulus package.

“We are committed to staying here until we have an agreement,” Pelosi said Tuesday on CNBC. “We are optimistic that the White House at least will understand that we have to do something.”

Pelosi had earlier delivered that message in a conference call with House Democrats. Some members continued to push for passage of a fresh stimulus bill, beyond what the House approved in May, but Pelosi is resisting that approach, according to two officials who were on the call.

There are multiple hurdles in front of any deal, including resistance among some Senate Republicans to any stimulus approaching the $2.2 trillion that Democrats want, along with widespread skepticism that there is enough time between now and the November election to negotiate.

President Donald Trump’s son-in-law and senior adviser, Jared Kushner, said Tuesday that any new stimulus may have to wait until after the Nov. 3 vote.

The House is scheduled to break for the election on Oct. 2.

Separately, a 50-member group of House Democrats and Republicans on Tuesday is releasing their own $1.52 trillion coronavirus stimulus plan in a long-shot attempt to break a months-long deadlock.