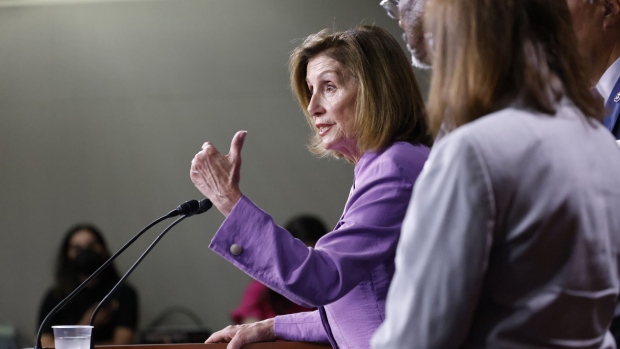 US House Speaker Nancy Pelosi, a Democrat from California, speaks during a news conference at the US Capitol in Washington, D.C., US, on Wednesday, Aug. 10, 2022. Pelosi's swing through Asia aimed to convey the United States' "strong and unshakable" support for the region but It ended up leaving many countries in stunned silence as China conducted unprecedented military drills around Taiwan. , Bloomberg

Pelosi told a news briefing Wednesday in Washington that Chinese leaders had been “trying to push their way” toward their goals on Taiwan before she led a congressional delegation there last week. The California Democrat was responding to a question about whether China would continue exercises near Taiwan, after conducting its most significant military drills near the island in decades, including likely firing ballistic missiles over Taipei.

“What we saw with China is they were trying to establish sort of a new normal,” Pelosi said. “And we just can’t let that happen.”

The drills held by China in response to Pelosi’s visit shrank a vaguely defined buffer zone that has long helped kept the peace around Taiwan, which Beijing views as part of its territory. On Wednesday, the People’s Liberation Army command responsible for the Taiwan Strait said it had “successfully completed all tasks” set out in the exercises and would “regularly organize patrols” in the area.

More than 180 Chinese warplanes operated east of the Taiwan Strait’s median line over an eight-day period ending Wednesday. Crossing the divider was once a rare event. The promise of more patrols will likely fuel concerns that Chinese President Xi Jinping will seek to make such incursions the new status quo.

The trip has further strained relations between the US and China, with Beijing suspending of a series of working-level talks on issues including military ties and climate change. It has also complicated President Joe Biden decision on the future of Trump-era tariffs on more than $300 billion in Chinese goods, Commerce Secretary Gina Raimondo said Wednesday.

“Certainly, it has made it a little more challenging,” Raimondo said in an interview on Bloomberg Television’s “Balance of Power With David Westin.” “It’s harder, but I am hopeful that we will get beyond that and get back to a place where we can have more of those discussions.”

Pelosi again declined to comment on Biden’s remark prior to her trip that the Pentagon didn’t approve of such a visit, but credited her military escorts with taking “very good care” of the delegation. “I don’t remember them ever telling us not to go,” she said.

The House speaker shrugged off the threat of Chinese sanctions, which Beijing announced last week without detailing the penalties. “Who cares?” she said.