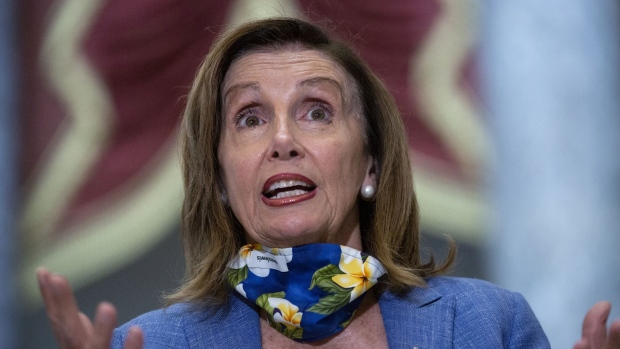 U.S. House Speaker Nancy Pelosi, a Democrat from California, speaks to members of the media at the U.S. Capitol in Washington, D.C., U.S., on Saturday, Aug. 1, 2020. White House Chief of Staff Mark Meadows said Democrats rebuffed multiple proposals from the Trump administration to extend lapsing supplemental unemployment benefits and have continued to raise the ante in talks on a stimulus package to bolster a U.S. economy hobbled by the coronavirus pandemic. Photographer: Stefani Reynolds/Bloomberg , Bloomberg

(Bloomberg) -- House Speaker Nancy Pelosi said she doesn’t trust information from the coordinator of the White House’s coronavirus task force, the latest political skirmish over the U.S. response to the Covid-19 pandemic.

President Donald Trump has been spreading disinformation about the virus and Deborah Birx “is his appointee, so I don’t have confidence there, no,” Pelosi said on ABC’s “This Week.”

Pelosi was asked about a Politico reports that she described Birx as a spreader of disinformation during a closed-door meeting Friday with Treasury Secretary Steven Mnuchin and White House Chief of Staff Mark Meadows.

“Deborah Birx is the worst. Wow, what horrible hands you’re in,” Pelosi said at the meeting, according to Politico.

A New York Times article in July on the Trump administration’s coronavirus response portrayed Birx as overly optimistic about the course of the pandemic. While voicing “tremendous respect” for Pelosi, Birx on Sunday criticized the newspaper’s reporting.

“I have never been called Pollyanna-ish or non-scientific or non-data-driven, and I will stake my 40-year career on those fundamental principles of utilizing data to really implement better programs to save more lives,” Birx said on CNN’s “State of the Union.”

The New York Times article centered on the administration’s discussions in April and described Birx as “a constant source of upbeat news for the president and his aides, walking the halls with charts emphasizing that outbreaks were gradually easing.”

In contrast, White House officials came to view Anthony Fauci, head of the National Institute of Allergy and Infectious Diseases, as “a purveyor of dire warnings but no solutions,” according to the newspaper.

“It was unfortunate that the New York Times wrote this article without speaking to me,” Birx said.

Also on CBS, Representative James Clyburn, Democrat of South Carolina, faulted the White House for a “piecemeal approach” to the coronavirus pandemic with medical experts talking about facts while Trump puts forth “a political agenda.”