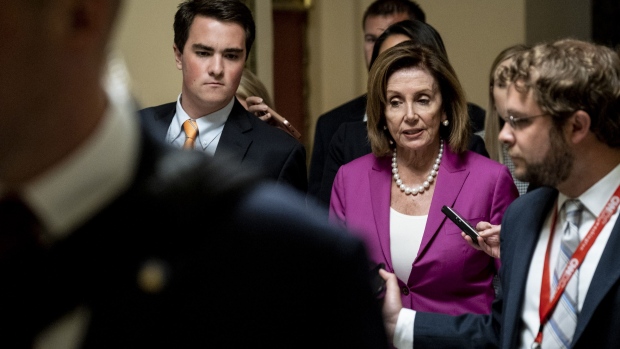 House Speaker Nancy Pelosi said she still wants a debt limit deal this week to give the House time to pass the measure next week before Congress’s August recess.

Pelosi and Senate Minority Leader Chuck Schumer spoke with Treasury Secretary Steven Mnuchin Wednesday, one of several phone calls in recent days. She said they are are still trying to negotiate a separate budget deal to include in a bill to give the U.S. more borrowing authority.

“Our goal would be to do a two-year budget cap deal and the debt ceiling,” Pelosi told reporters. “If we are going to pass it by next Thursday, which is what we want to do and we are going to follow regular order, then we have to get something soon so that we can post it with enough time.”

Pelosi pushed back on suggestions that Congress could rely on a short-term debt ceiling fix if the broader negotiations fall through.