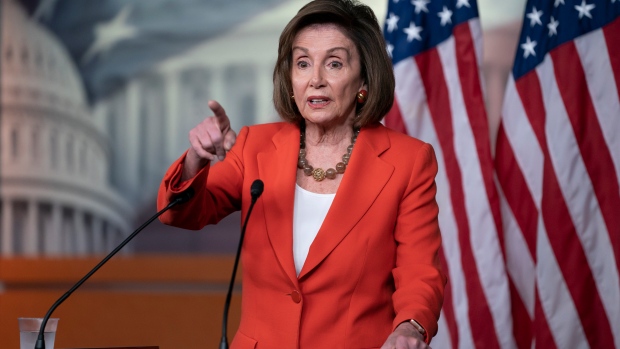 Speaker of the House Nancy Pelosi, D-Calif., talks to reporters just before the House vote on a resolution to formalize the impeachment investigation of President Donald Trump, in Washington, Oct. 31, 2019. AP Photo/J. Scott Applewhite

“For us, this is a really a very, very proud day,” Pelosi said at a small ceremony to enroll the bill, which passed unanimously in the Senate and with support from all but one Republican in the House.

Trump plans to sign the bill, according to a person familiar with the matter, even as his administration tries to finalize the first phase of a long-awaited trade deal with China. Even though the Chinese Foreign Ministry warned of “strong countermeasures” in response to the legislation, Vice Premier Liu He on Wednesday told participants in a private dinner in Beijing he was “cautiously optimistic” about reaching a trade agreement with the U.S., according to people who attended.

Pelosi acknowledged the economic risks of angering the world’s largest emerging market, but she said if the U.S. doesn’t “speak up for human rights in China because of commercial issues, we lose all moral authority to speak about human rights anywhere in the world.”

--With assistance from Shawn Donnan.