Peloton plunges to record low after hopes for comeback dim

Peloton Interactive Inc. delivered a weaker forecast for the current quarter than Wall Street was predicting, even as management declared that it was beating its own timeline for turning around the fitness company. The shares dropped about 19 per cent in early trading.

Sales will be US$700 million to US$725 million in the fiscal second quarter, which runs through December, Peloton said in a statement Thursday. That's down about 37 per cent from a year earlier and well below the US$869 million average analyst estimate.

The outlook suggests Peloton is still struggling to recover from a post-pandemic hangover. The company had seen sales surge during COVID-19 lockdowns, only to suffer a glut of inventory after consumers went back to offices and gyms. Chief Executive Officer Barry McCarthy took the helm in February and launched a comeback plan but has yet to win over investors.

Peloton fell about 19 per cent in premarket trading before exchanges opened in New York after closing at US$8.63 on Wednesday. The shares have lost about 90 per cent of their value over the past 12 months.

He acknowledged in a letter to shareholders that Peloton's turnaround remains a “work in progress,” saying the New York-based company is still figuring out how to better deliver its bikes to consumers and improve customer service. But he said Peloton is moving toward his goal of generating free cash flow, with a “stable underlying business.”

“Considering our progress over the last seven months, the substantial changes we've made to our business model, and the infusion of additional talent on the leadership team, I believe our 1Q23 results make a strong case that we will beat the one-year timeline and deliver on our turnaround goal,” McCarthy said. 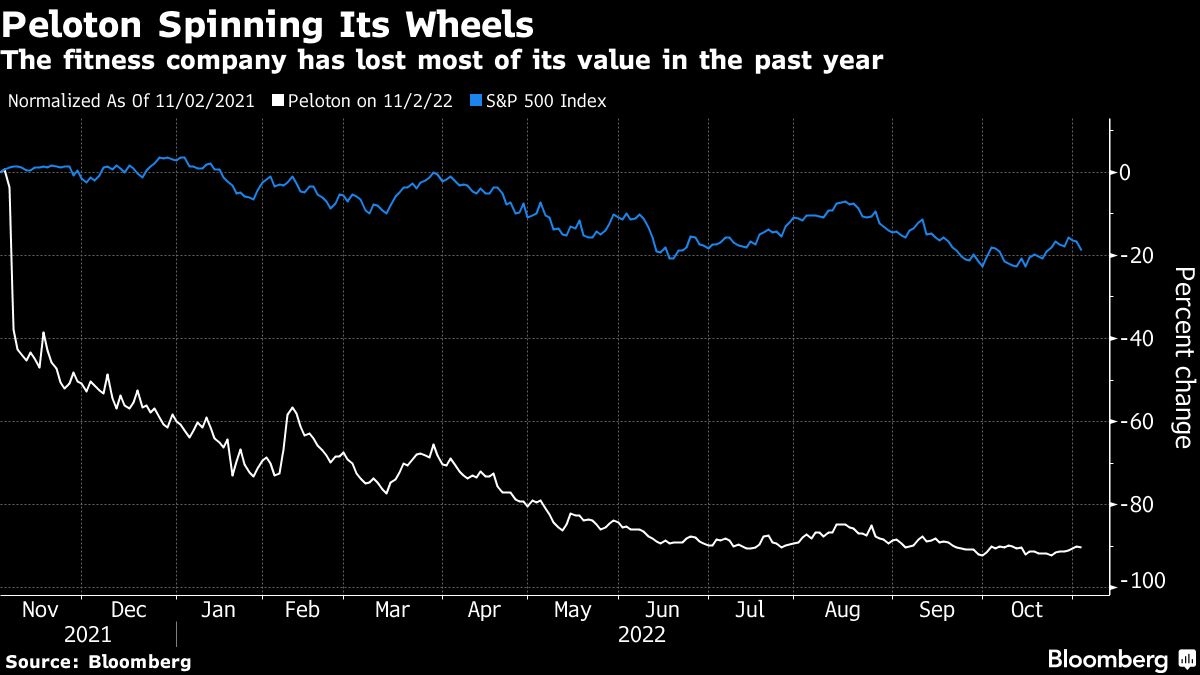 In the fiscal first quarter, revenue declined 23 per cent to US$616.5 million, missing the average estimate of US$641 million. Revenue from subscriptions climbed 36 per cent, but the money generated from Peloton's hardware products -- like its bikes and treadmills -- fell nearly 60 per cent. The adjusted loss before interest, taxes, depreciation and amortization was US$33.4 million.

While subscription revenue increased, overall app subscriptions declined from the year-ago quarter and fell 11 per cent from the fourth quarter of last year to 875,000 subscribers. Connected fitness subscriptions -- the monthly service for viewing Peloton content on the company's hardware -- rose 19 per cent. Overall, Peloton members grew 6 per cent on an annual basis, but fell 3 per cent from last quarter.

In the second quarter, Peloton's adjusted loss will be US$100 million to US$115 million. That's a bit worse than the US$97 million loss analysts had predicted. One bright spot of the forecast was gross margins, which are poised to improve to about 36 per cent, versus roughly 25 per cent a year earlier.