The outlook follows a similarly dire fourth quarter, when sales plunged 28 per cent to US$678.7 million and the adjusted loss was US$288.7 million. On a net basis, the loss was US$1.2 billion -- about four times the size of the company’s loss a year earlier.

The numbers suggest that a turnaround plan under Chief Executive Officer Barry McCarthy still has a long way to go. He took the reins in February and slashed expenses -- cutting thousands of jobs and shuttering operations -- but the company is facing sluggish demand and a buildup of inventory. On Wednesday, Peloton announced plans to begin selling its bikes and accessories on Amazon.com Inc.’s site, aiming to broaden its distribution.

The Amazon news gave a boost to shares, but they remain down nearly 90 per cent over the past year. After the company published its outlook on Thursday, the stock dropped 6.5 per cent in premarket trading before markets opened in New York. 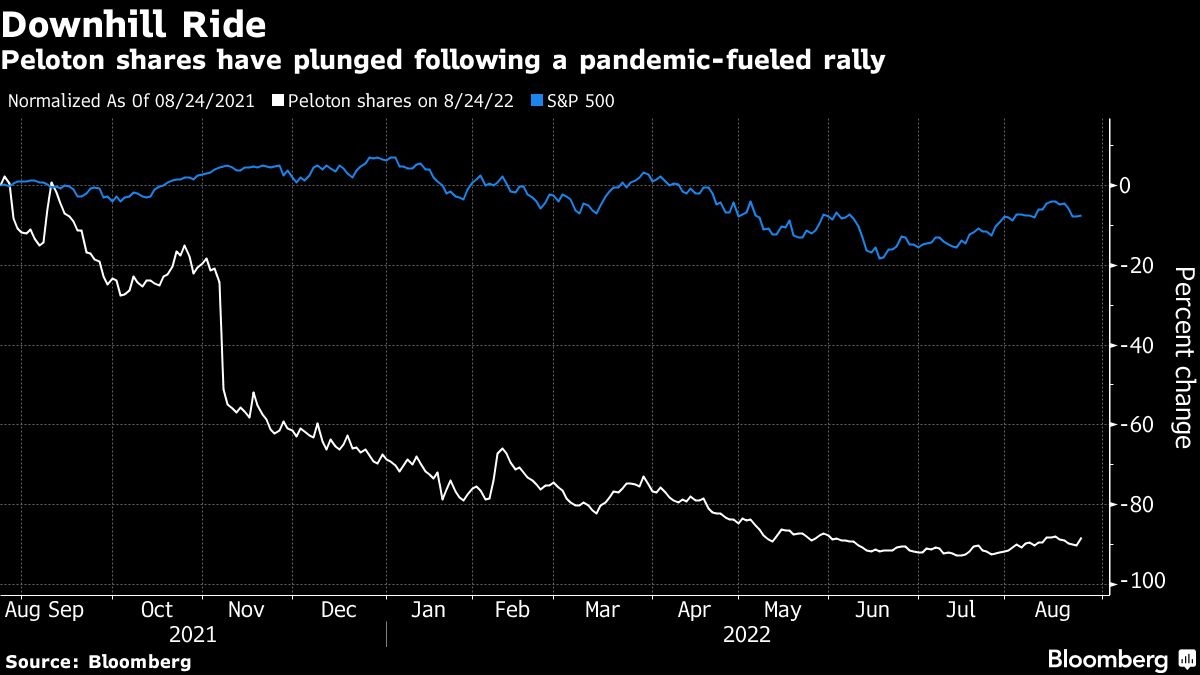 McCarthy was blunt about the challenges in a letter to shareholders Thursday, but said Peloton is making headway.

“The naysayers will look at our Q4 financial performance and see a melting pot of declining revenue, negative gross margin and deeper operating losses. They will say these threaten the viability of the business,” McCarthy said. “But what I see is significant progress driving our comeback and Peloton’s long-term resilience.”

The net loss in the fourth quarter, which ended June 30, included US$415 million in costs related to the comeback plan.

A slowdown in subscriber growth has added to Peloton’s challenges. Last quarter, it had 2.97 million connected fitness subscribers -- people who receive content on Peloton equipment -- up 27 per cent from a year earlier. But the figure was flat from the previous quarter.

Workouts on Peloton equipment fell 4 per cent from a year earlier and 20 per cent from the last quarter. The company had seen a surge in use during the pandemic, when stuck-at-home consumers snapped up its equipment. But even with the slowdown, engagement is “tracking well above pre-COVID levels,” Peloton said. The connected fitness number is expected to stay around 3 million in the coming quarter.

McCarthy’s goal is to make Peloton cash flow positive in the second half of the coming fiscal year. “We continue to make steady progress, but we still have work to do,” he said.

In an interview earlier this month, McCarthy said the company should prioritize its digital offering over hardware and that it’s exploring allowing subscribers to beam content from their smartphone to non-Peloton fitness equipment.

In recent weeks, the company also announced a plan to outsource all manufacturing to third-party factories, cut its customer service operations in half, shift away from in-house deliveries and warehouses, and lay off hundreds of workers.

In an effort to increase cash flow, the company also hiked prices for its Bike+ model and Tread treadmill by US$500 and US$800, respectively.

Peloton believes its new leasing program -- which combines a bike and content into a monthly price without a down payment -- may help with the turnaround, saying that churn for the initiative is low and that it will expand its marketing for the program in September.

“Our test results show the program is driving increased traffic to the top of our marketing funnel and clearly appeals to a younger, more value-conscious consumer,” McCarthy said.

The company isn’t giving full-year guidance for fiscal 2023, citing “broader macroeconomic uncertainties and the pace and number of changes we’re making to our business.” It also will no longer report quarterly engagement metrics.

In describing Peloton’s challenges, McCarthy reflected on his time working on a cargo ship in high school.

“After midnight on my second voyage, I was asleep when the alarm for general quarters woke me,” he said in the shareholder letter. “The ship was healing sharply to starboard and the steel hull was shuddering. The captain was trying to turn the ship around, but a ship that big, going that fast, takes miles and miles to change direction.”

Peloton, he said, is like that cargo ship. “We’ve sounded the alarm for general quarters. Everyone’s at their station,” McCarthy said. “When will the ship respond is the question. Our goal is FY23.”