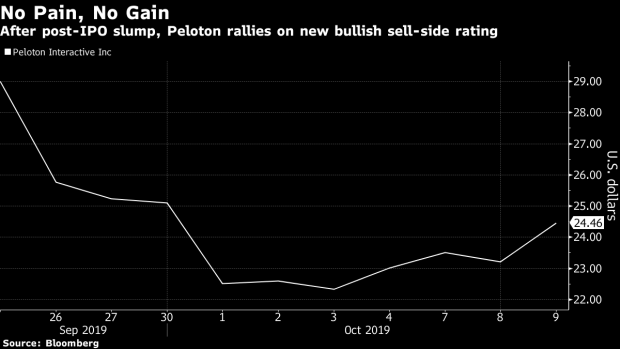 (Bloomberg) -- Peloton Interactive Inc. shares are on track for their best day in the company’s two-weeks as a publicly traded entity after the fitness company earned its first “buy” equivalent rating.

Shares were up close to 4% at 3 p.m. on Wednesday, on course for the biggest one-day gain since their Sept. 26 listing, after Baird analyst Jonathan Komp initiated the stock at outperform.

“Peloton has created a disruptive platform that delivers world class instructor-led fitness content (Bike/Tread/digital) via its vertically integrated ‘box+subscription’ model that is differentiated from current gym/fitness offerings and product-only companies,” Komp wrote in a note. Key satisfaction/engagement measures are “very positive” and he believes the company has an addressable market of about 9 million higher-income fitness enthusiasts.

Today’s rally follows a disappointing performance for the stock since its listing. Shares had dropped about 20% from their $29 debut price to the close on Oct. 8.

Peloton’s long road to profitability has weighed on investor enthusiasm. In a note initiating the stock at neutral dated Sept. 27, DA Davidson analysts led by Michael Kawamoto said they “remain impressed with PTON’s robust growth metrics, but believe the path to profitability is a long one, as recent investments will take time to ramp.”

Komp and Kawamoto are the only two analysts covering the stock at this time, according to Bloomberg data.

To contact the reporter on this story: Janet Freund in New York at jfreund11@bloomberg.net

To contact the editors responsible for this story: Catherine Larkin at clarkin4@bloomberg.net, Morwenna Coniam