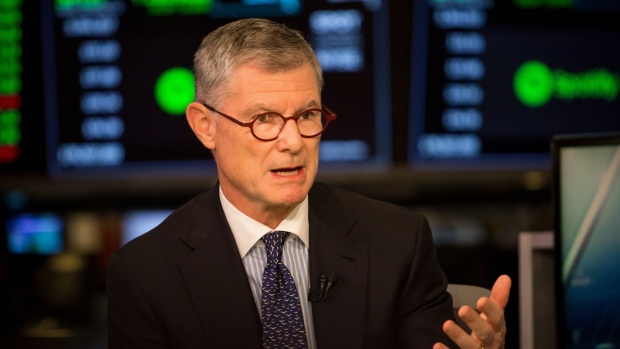 A Peloton stationary bike for sale at the company's showroom in Dedham, Massachusetts, U.S., on Wednesday, Feb. 3, 2021. Peloton Interactive Inc. is scheduled to release earnings figures on February 4. , Bloomberg

(Bloomberg) -- Peloton Interactive Inc. is planning to redesign its bikes so that customers can self-assemble them at home and will explore letting users beam its content to rival workout machines, part of a wide-ranging turnaround bid under Chief Executive Officer Barry McCarthy.

When a customer currently orders a bike from Peloton, the equipment is delivered and set up by a professional in the user’s home. The idea going forward will be to design the bike so customers can unbox and assemble it themselves, McCarthy said in an interview.

“We’ve been working on it for a while, and it’s a real thing,” he said. “We’ll continue to cost-reduce the hardware and we will engineer it so that you can assemble it, so that we can ship it via FedEx.”

The do-it-yourself push is part of a broader effort to slash costs. The New York-based fitness company said Friday that it would lay off about 800 workers, raise the prices of its equipment, and outsource deliveries and some customer service functions. It’s also looking to wind down much of its retail footprint in North America starting next year.

McCarthy took the helm in February and is racing to turn around the former stock market darling, which has struggled with declining revenue and widening losses ever since a pandemic-fueled sales boom sputtered. As part of last week’s strategy changes, Peloton said it would close several North American warehouses and fire over 500 employees who work in product distribution. It will instead rely entirely on logistics firms for delivery and installation. Peloton didn’t specify when the shift to self-assembly would occur.

The company -- best known for its stationary bikes -- also is pushing into new categories. That includes a long-in-the-works rowing machine that’s slated to launch later this year.

“We’re hopeful to have it for the holiday season,” McCarthy said. The device will be Peloton’s first new fitness machine since it launched a lower-end treadmill two years ago, though it did release a Guide device for watching Peloton content on a TV set earlier this year.

The Peloton CEO said he would like to reintroduce the company’s high-end Tread+ treadmill, which was recalled in 2021 after it was linked to injuries by children and one death. Any relaunch needs to be cleared by the government and that will require negotiation, McCarthy said.

“The government decides when and what in terms of reentry,” he said.

Then there’s the notion of delivering Peloton content to other manufacturers’ equipment. Consumers can already use the company’s $12.99-a-month app on a range of devices, including smartphones, tablets and set-top boxes. The hope is that sharing Peloton content more widely will help bring its user base to 100 million.

McCarthy said that the company is “in the process of rethinking” its strategy for the digital service. Peloton is exploring a “freemium” model for the offering, meaning that some features in the app may be free while others remain behind a paywall.

Users could ultimately pair a smartphone or tablet over Bluetooth with a third-party bike or treadmill and beam that content to the equipment’s display, McCarthy said. That approach would be reminiscent of how Apple Inc. lets users show content from their iPhone on the screen in their car over CarPlay.

The company is also gearing up for a widespread launch of its leasing program, which allows users to pay a combined monthly price for both a Bike and content subscription without a down payment. Peloton started testing the program in some markets earlier this year for $89 per month, but it will now more actively promote it.

“We’re making the bet that if you love our service as much as the rest of our users do, you’ll exhibit low monthly churn and have a high lifetime value,” McCarthy said. “We’ll recoup the investment we made in the hardware plus profit over time.”