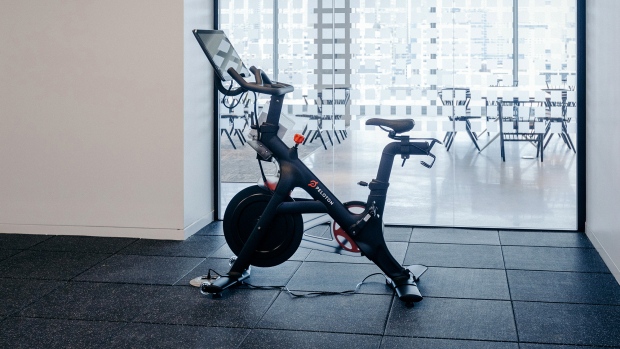 Peloton Interactive Inc. shares are on pace to open at another record high after third-quarter results and a boosted year-end forecast blew away Wall Street’s estimates, indicating that strong demand for its exercise products is here to stay.

The coronavirus pandemic contributed to growth in the quarter as fitness centers were ordered to close and consumers turned to at-home physical activities. This shift in behavior was widely touted by Wall Street over recent months, but analysts still underestimated the degree of heightened demand.

Connected fitness subscribers rose to 886,100 at quarter end, topping expectations for 858,000, which reflects an average of five estimates compiled by Bloomberg News.

“Fiscal third-quarter results reinforce our thesis that consumer behavior is fundamentally changing due to Covid-19 and that Peloton is benefiting from this shift as demand accelerates,” said JMP analyst Ronald Josey.

Even BMO’s Simeon Siegel, who holds the lone sell-equivalent rating on the stock, couldn’t ignore the beat-and-raise results and called the earnings update “great.”

Shares climbed as much as 21 per cent ahead of the bell to US$46.10, easily surpassing the current intraday record high of US$39.26. Even before Thursday’s trading, the New York-based company’s 19 per cent rally leading up to its results had it on pace for the best week since late November. 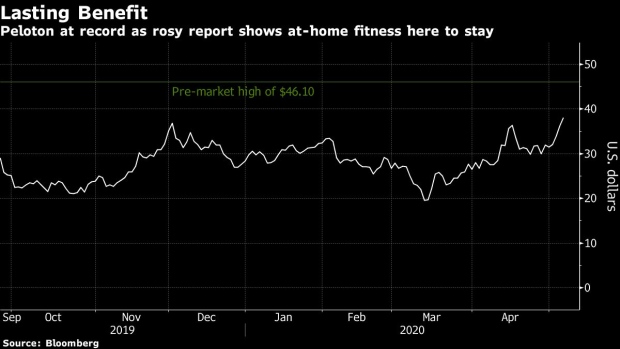 Here’s more of what analysts had to say following Wednesday evenings’ results:

“Covid-19 is shifting user behavior across a wide range of activities,” and Anmuth believes “accelerating the adoption of connected home fitness & the impact will prove sustainable.” “It will take time for people to return to gyms and boutique fitness classes, and it is debatable if/when membership levels will ever return to pre-Covid levels.”

Meanwhile, Peloton has more to look forward. The pushed-out release of the lower-priced Tread will be a “major product launch in 2021, with market size potential 2-3x that of Bike.”

Rates overweight, price target to US$58 from US$40.

The first quarter of positive adjusted Ebitda occurred “at least four quarters ahead of schedule and gives us greater insight into the long-term profitability of the model.” Peloton’s fourth-quarter forecast topped even Yruma’s Street-high view, he wrote in the note to clients.

“Covid-19 clearly helped accelerate the secular trend of at-home digital fitness, but we also think that the timing caused PTON to build on its relative advantage vs. sub-scale competitors.”

Rates overweight, price target to US$55 from US$45.

“Peloton’s high-quality content, growing community tools (like Tags) and overall convenience -- which we define as its ‘Three Cs’ -- are significantly differentiated and can deliver sustained demand profitably longer term as most gyms and fitness studios are closed and are unlikely to fully open in the near future.”

In addition to rising engagement and digital adoption, a key takeway from the quarter was the expansion of Peloton’s user demographics. “Users 35 years and under now account for just under 30 per cent of sales, up from ~20 per cent a year ago, and households with income under US$100K now account for 50 per cent+ of FY YTD sales,” Josey said.

Peloton’s addressable market is expanding, as its home trial and financing plans make the service more affordable than traditional gyms and/or studios, he said.

Rates outperform, price target US$53 from US$43

“This was a great print.” The fourth-quarter expected subscriber surge benefits from “incredible organic awareness flowing through to profitability,” and shows Peloton’s “clear strength/positioning.”

However, in Siegel’s view, the recent stock rally shows the market is already pricing in greater than 5 million subscribers, which leads to his concern that

1long-term exuberance is being driven by short-term growth.