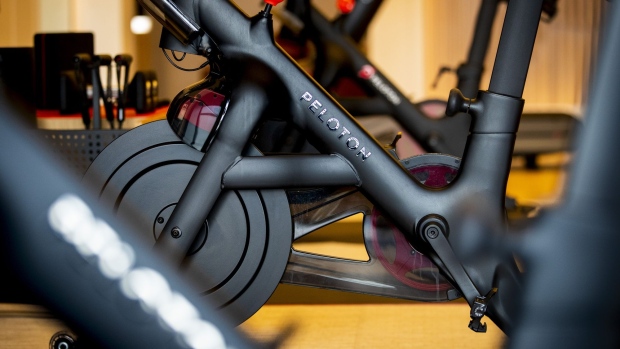 (Bloomberg) -- For Peloton Interactive Inc., the past week included a stock crash, a stock rally and the specter of job cuts at the formerly highflying company.

And on top of it all: another television character having a heart attack after riding a Peloton bike.

Just about a month after a character died following a Peloton workout on HBO Max’s “Sex and the City” sequel series, a similar plot line unfolded on Showtime’s “Billions.” In this case, the character known as Wags -- played by David Costabile -- survives the experience.

Peloton said in a statement that it didn’t agree for its brand and intellectual property to be used on the show and didn’t provide any equipment.

“Showtime’s use of Peloton’s Bike+ and reference to a Peloton instructor was not a brand and product placement,” the company said.

Early in the episode, the premier of the show’s sixth season, paramedics are summoned to help Wags after he has heart problems. But he recovers and returns to the office, saying “It’s a small heart attack.” He goes on to say, “I’m not going out like Mr. Big,” referring to the “Sex and the City” character who died. (The line was added in post production after the other episode aired, according to the New York Times.)

The fitness company enjoyed a boom during the pandemic, when stuck-at-home consumers sought out its stationary bikes and fitness classes. But growth is now slowing, and Chief Executive Officer John Foley said this week that the company is considering layoffs and other cutbacks.

Peloton’s marketing has long been seen as key to its success, with its instructors becoming online stars and evangelists for the brand. So the “Sex and the City” death was a blow -- especially because it came as a surprise to the company.

In that instance, the stock dropped and BMO Capital Markets analyst Simeon Siegel worried that Peloton had “lost control over its storytelling.”

Peloton’s “Billions” cameo probably won’t have the same impact, especially as investors and employees focus on the company’s next steps. Peloton also noted that the “Billions” episode mentioned the health benefits of a good workout.

“As referenced by the show itself, there are strong benefits of cardiovascular exercise to help people lead long, happy lives,” Peloton said.