The takeover battle for one of Canada’s largest energy companies moved closer to resolution after Pembina Pipeline Corp. terminated its $8.5 billion (US$6.7 billion) deal to acquire Inter Pipeline Ltd., clearing a path for Brookfield Infrastructure Partners LP, which has pursued a hostile bid.

Inter Pipeline will pay a $350 million termination fee to Pembina and will make a recommendation to shareholders on Brookfield’s unsolicited offer “in due course,” according to a statement Monday. After five months of trying to fend off its suitor, Inter said its board is “open to engaging with Brookfield in an effort to reach a mutually agreeable transaction.”

The scramble for control of the Calgary-based midstream company marks the biggest corporate fight in the Canadian resources industry since Newmont Mining Corp. thwarted a hostile bid by Barrick Gold Corp. in 2019 by agreeing to a joint venture around the two companies’ projects in Nevada. 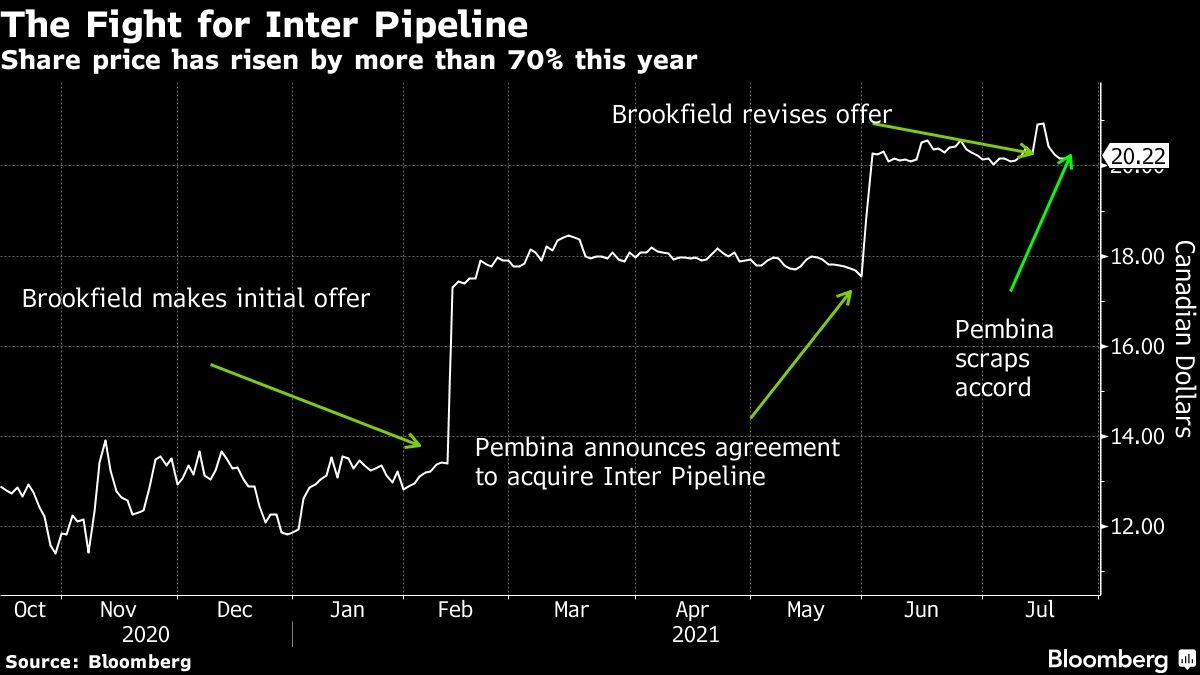 “The cash component became the bigger piece in this transaction for shareholders and the board,” Thummel said in an interview on BNN Bloomberg Television. “Maybe the choppiness in the market we’ve seen lately made the absolute cash component of Brookfield’s offer more intriguing to the IPL board.”

Under the now-withdrawn offer by Calgary-based Pembina, investors would have received 0.5 of a Pembina share for each Inter share, a proposal valued at $19.70 per share as of the close Friday.

Brookfield’s latest offer comprises either $20 a share in cash or 0.25 of a Brookfield Infrastructure Corp. share, subject to proration.

Inter’s decision to scrap the Pembina deal “implicitly affirms the merits of our offer,” Brookfield said Monday in a statement. The company added that it expects Inter’s special committee of independent directors “to formally recommend our offer as any delay would be counter to the best interests of shareholders.”

The takeover fight began in February with an unsolicited $7.1 billion offer from Brookfield. That was rejected by Inter, which subsequently agreed on June 1 to be bought by Pembina.

Brookfield has revised its offer three times. Inter shareholders were scheduled to vote on the Pembina offer at a July 29 meeting. The company said Monday the meeting will still go ahead to allow investors to vote on other matters.