Pembina Pipeline Corp. agreed to acquire Inter Pipeline Ltd. for about $8.3 billion (US$6.9 billion) in an all-stock deal that will create one of the largest energy companies in Canada.

The proposal from Pembina trumps a hostile takeover offer for Inter made by Brookfield Infrastructure Partners LP earlier this year. Inter spurned that approach and began a review of its options, which included a sale.

The Pembina-Inter combination is the largest Canadian energy transaction in four years. It continues a trend of consolidation in the sector in the face of low oil prices and regulatory uncertainty, highlighted by U.S. President Joe Biden’s cancellation of TC Energy Corp.’s Keystone XL oil export pipeline in January.

Adding Inter will give Pembina additional pipeline infrastructure across Western Canada, connecting the region’s oil sands and natural gas producers with domestic and foreign customers. Pembina, a major processor of natural gas liquids, will increase its ability to deliver condensate on Inter’s system to the oil sands, where the product is used to dilute the thick bitumen that’s dug out of the ground so that it can be transported by pipeline or rail. 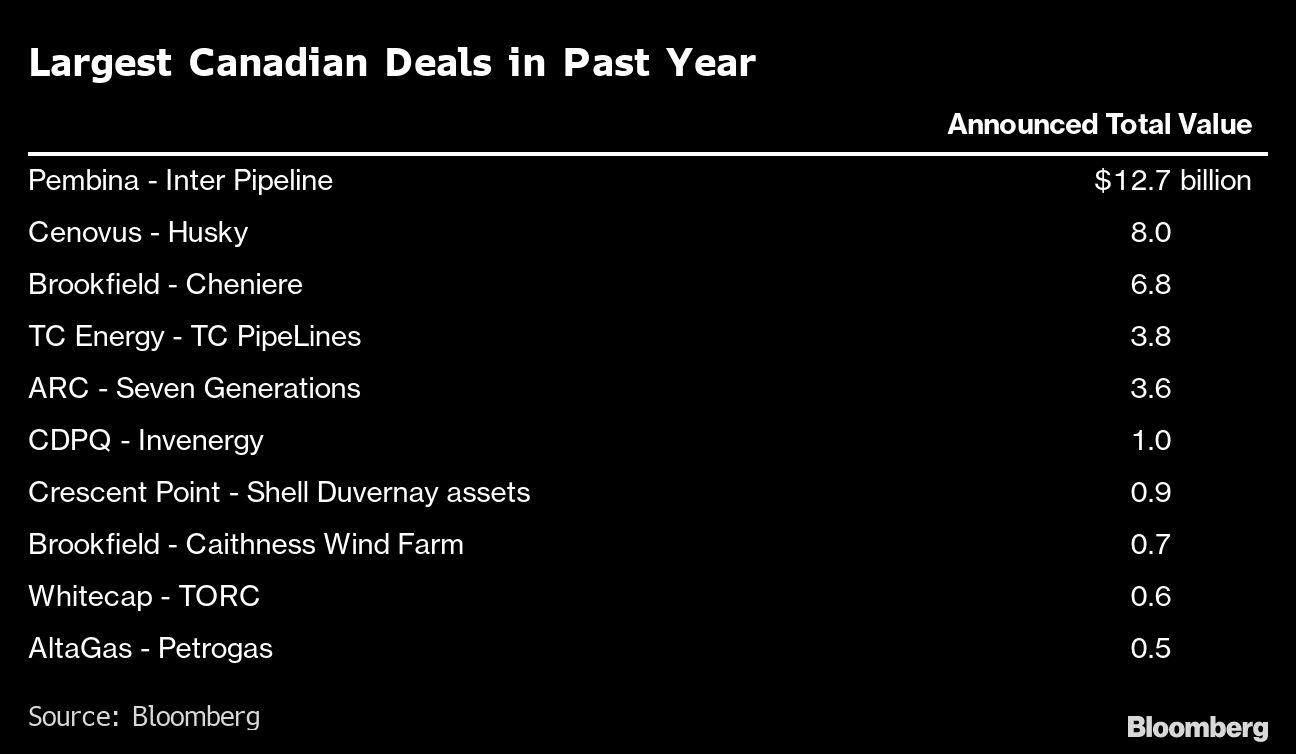 The two Calgary-based pipeline companies said Tuesday the takeover will lead to annual cost savings of as much as $200 million and create an operator with capacity to transport 6.2 million barrels a day of gas, oil and natural gas liquids throughout the region. The merged company will run by Pembina’s senior executive team.

Pembina said its offer values Inter at $19.45 per share prior to the start of trading, while Brookfield’s offer was $16.50. Brookfield declined to comment on Tuesday’s merger announcement.

“Brookfield could easily come back at a US$19.50 to US$20 cash offer and probably still make the numbers work,” Ryan Bushell, a portfolio manager at Newhaven Asset Management Inc., said on BNN Bloomberg Television. “We’ll find out pretty shortly how badly Brookfield wanted this in the first place. But if I had to guess, I’d say they’d probably want to wash their hands of it.”

The Inter acquisition follows Pembina’s purchase of a Canadian unit and pipeline assets from Kinder Morgan Inc. for about US$4.5 billion in 2019 and its takeover of British Columbia pipeline operator Veresen Inc. for $5.8 billion two years earlier. Pembina Chief Executive Officer Michael Dilger said his company has tried to buy Inter on two previous occasions.

“Third time is lucky,” he said on a conference call. “This is just the right time.”

Pembina will also take on Inter’s Heartland Petrochemical Complex, which is under construction in Alberta. Inter has been looking for a partner to help fund the $4.2 billion construction cost while also trying to sign long-term sales contracts for 70 per cent of the plant’s capacity.

Pembina previously suspended work on the petrochemical plant it was planning to build in Alberta in a venture with Kuwait’s Petrochemical Industries Co. The odds of reviving that project “go up a lot now,” Dilger said. “If you can add another plant, you are amortizing those costs by half.”

Buying Inter gives Pembina energy terminals in Sweden and Denmark. Inter CEO Christian P Bayle had plans to sell the European assets, Dilger said. “It looks like a good business,” he added. “Is is strategic. We will see.”

Scotia Capital is Pembina’s financial adviser, while TD Securities advised Inter. JPMorgan Chase & Co. is the financial adviser to the special committee of Inter’s board and gave a fairness opinion.