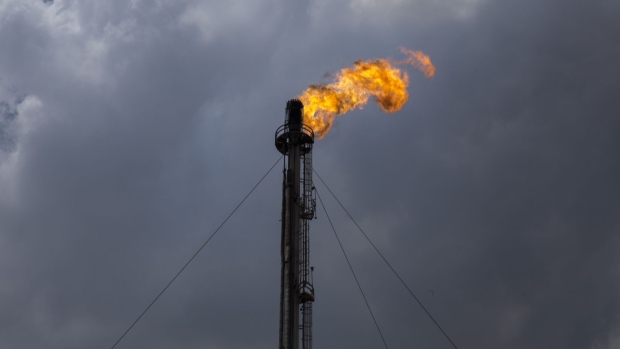 A gas flare stands at the Petroleos Mexicanos (PEMEX) Miguel Hidalgo Refinery in Tula, Hidalgo, Mexico, on Tuesday, April 18, 2017. The $2.1 billion project to develop and operate a coker unit at the Pemex's Tula refinery will turn lower-value fuel into products like gasoline and diesel. Photographer: Yael Martinez/Bloomberg , Bloomberg

(Bloomberg) -- Mexico’s flagship energy project, a refining complex in the southern region of the country that has faced billions of dollars in cost overruns, is drawing concerns from members of the Petroleos Mexicanos board.

Last week, the board of the state-run oil company approved a bigger budget for the project -- but the vote was far from unanimous, according to people with knowledge of the deliberations, asking not to be identified because the information isn’t public. Three members voted to reject the new spending plan, they said. And at least one member who approved it voiced concerns about the lack of accountability in managing costs. In raising the budget, the board also eliminated the methodology used to track the costs of the project, stripping away what some saw as a critical means of oversight.

Spokespeople for the Mexico energy ministry and Pemex didn’t respond to requests for comment. The extra yield investors demand to hold the company’s dollar bonds due in 2050 over US Treasuries rose by about 27 basis points on Wednesday to 779 basis points, according to Trace pricing data compiled by Bloomberg.

The unusual boardroom clash underscores how much the Dos Bocas project is straining Pemex’s finances and eating away at the political capital of Mexico President Andres Manuel Lopez Obrador. AMLO has hailed the Dos Bocas refinery as key to his goal of ending Mexico’s reliance on the rest of the world for fuel, bringing the nation one step closer to energy independence. Once complete, it will be the country’s seventh refinery, increasing its oil-processing capacity by 20%.

But the project has come at a high price: Contracts for construction through 2024 have risen to more than $14 billion and will probably total between $16 billion and $18 billion by the time the complex is complete, more than double the original price tag. The overall cost may rise even further amid delays.

That may have some investors worrying. The Wednesday jump in Pemex’s 2050 yield spread over Treasuries was far greater than moves seen in state-owned energy peers including Brazil’s Petroleo Brasileiro SA and Colombia’s Ecopetrol SA.

The Pemex board of directors consists of five independent board members and five top government officials, including the nation’s energy and finance ministers. The three members who voted against the budget were all independent, according to the people familiar with the situation.

The refinery was declared open on July 1 despite it not yet being ready to produce fuel. Actual operations are expected to start in the middle of next year. The cost overruns prompted the resignation of a high-profile government auditor in December.

(Updates to include bond spreads in third and sixth paragraphs. Adds chart.)