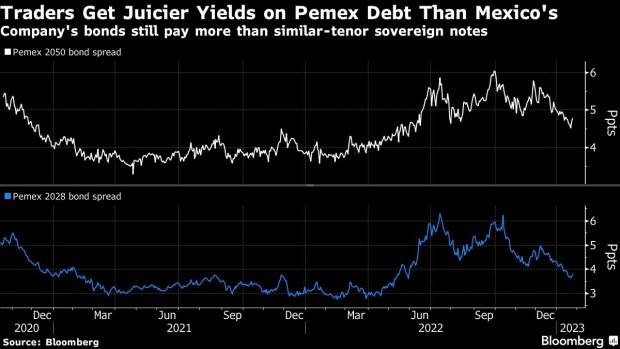 (Bloomberg) -- Bonds from Mexico’s Petroleos Mexicanos are sinking as investors worry that plans to raise more cash will add pressure on the world’s most-indebted oil producer.

The state-run company’s dollar debt was among the worst-performing in high-yield markets on Wednesday, with bonds due in 2041 slumping as much as 2.3 cents to 70.63 cents, according to Trace data. The declines comes as traders consider Pemex’s plan to sell at least $2 billion in new debt, a sum meant to help the firm keep up on a deluge of upcoming bond payments.

“It’s a bit disappointing that they would be coming, theoretically, without sovereign support,” said Edwin Gutierrez, head of emerging-market sovereign debt at Abrdn.

While the government has indicated it will help Pemex if necessary, it’s yet to announce any new measures.

Read: Pemex Plans Bond Sale in Weeks With Billions in Payments Due

A potential bond sale would follow last June’s debt maneuver — which paid oil suppliers with notes they had to sell in the secondary market. It was deemed a flop due to weak demand.

The company’s problems, meantime, have multiplied. Payments on about $105 billion in debt are piling up after nearly two decades of declining oil production. Revenues have also suffered as the firm focuses on refining, rather than investing in more-lucrative crude exports or new oil discoveries.

Plus, the world’s biggest oil-services provider, SLB, on Wednesday said it’s owed about $1 billion for work it has done for Mexico.

“Pemex is unlikely to generate substantial free cash flow at current oil prices, and with over $20 billion in debt maturing by the end of 2025, the government will need to inject substantial equity if gross leverage is to be reduced,” said Declan Hanlon, chief strategist for emerging-market corporate credit at Santander Investment Securities.

“In the near term, this would require more than $5 billion in equity and new issuance to credibly address the amortization schedule and provide some comfort to the market,” he said.

--With assistance from Maria Elena Vizcaino.