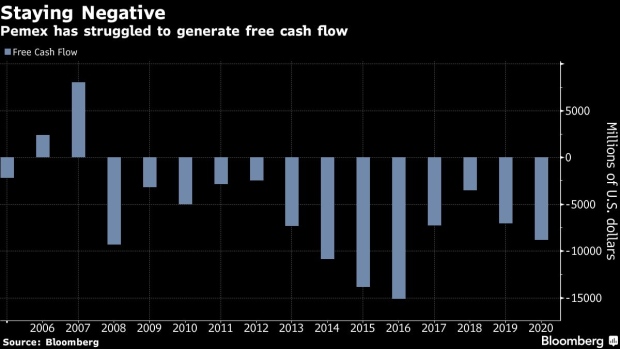 Octavio Romero, chief executive officer of Petroleos Mexicanos (PEMEX), listens during an interview in Villahermosa, Tabasco state, Mexico, on Wednesday, May 15, 2019. Mexico is working on a new formula for pricing its crude to reflect upcoming regulations on fuel oil that will affect its multi billion-dollar sovereign oil hedge, considered the largest single oil deal in Wall Street, Romero said in an interview. , Bloomberg

“It seems to us that it’s an action taken by the credit rating agency that lacks professionalism, ethics -- in short, it’s something shameful,” Romero said.

Pemex has struggled to invest in new fields because of budgetary constraints, a large tax burden and a debt load that’s the highest of any oil company. On Wednesday, the driller reported rising oil output for a second straight quarter. But the production gains came in large part due to an increase in extraction of condensate -- used to dilute some heavy crude -- rather than the company’s flagship crude for export.

Mexico’s new government has pledged to return Pemex to its former glory by dismantling the liberalizing energy reforms of the previous administration. President Andres Manuel Lopez Obrador’s administration has canceled new oil and gas auctions, designed Pemex as the operator of a giant field discovered by foreign companies, and cracked down on private fuel importers to give the state driller the upper hand.

Yet critics argue that the nationalistic approach to Mexico’s oil sector puts too much financial pressure on Pemex to develop oil fields without partners, and that the government’s decision to focus on gasoline independence distracts from the company’s core job of drilling.

While Pemex bonds sank earlier in the day after Moody’s downgraded the credit, bonds maturing in 2031 nearly erased the day’s losses after the company reported earnings. The debt trades close to 96.6 cents on the dollar, little changed on the day

In May, Pemex announced the takeover Royal Dutch Shell Plc’s 50% stake in its refinery in Deer Park, Texas, for $596 million. The Mexican oil giant is also building a seventh refinery near the Dos Bocas maritime port in the state of Tabasco at a cost likely to exceed $10 billion.

Moody’s justification for cutting Pemex’s rating demonstrates “obvious logical contradictions” and the company will issue a detailed statement expressing its disagreement on Wednesday, Romero said. He noted that the acquisition of the Deer Park refinery and the construction of Dos Bocas are being funded with federal resources.

The company’s financial debt rose to $115.1 billion at the end of June, from $113.9 billion at the end of March. Pemex said it didn’t receive any proceeds for the first half of its 2019-2021 hedging program because observed prices were above the strike price. Its current hedging strategy corresponds to about 50% of the full year 2021 exposure.

In March, Pemex said that the government would absorb some $6.4 billion of its debt amortization payments. President Lopez Obrador also announced in February a new credit stimulus that will apply to the taxes Pemex pays on hydrocarbons, capped at $3.6 billion.