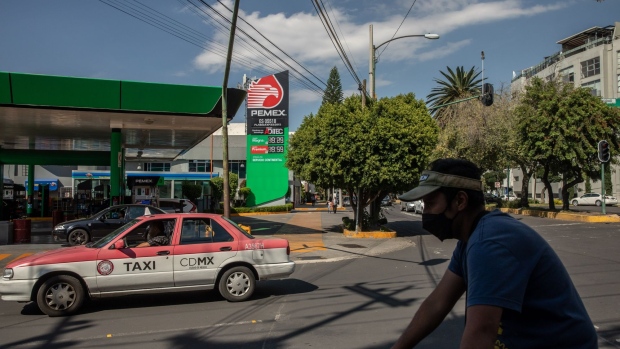 A taxi cap passes in front of a Petroleos Mexicanos (Pemex) gas station in Mexico City, Mexico, on Thursday, Oct. 1, 2020. Mexican President Andres Manuel Lopez Obrador vowed to restore the national oil company to its former glory. Instead, Petroleos Mexicanos is drowning in debt, its oil output is declining, and now it appears to be losing fuel market share in its own backyard. Photographer: Alejandro Cegarra/Bloomberg , Bloomberg

(Bloomberg) -- Petroleos Mexicanos has missed a deadline to pay profit-sharing bonuses to its traders, less than a year after asking them to return an earlier round of payouts, according to people with knowledge of the situation.

Payments due in May weren’t made to workers at the state-owned Mexican oil company’s PMI and Mex Gas oil and liquefied petroleum gas trading units, according to company correspondence seen by Bloomberg and people who asked not to be named because they weren’t authorized to discuss it in public.

Pemex has seen its profits dwindle under an over-sized tax burden, soaring debt of almost $114 billion and declining oil production -- which has fallen every year for the past decade and a half. But some of its affiliates are profitable because they provide services to the parent at competitive rates.

Employees at Pemex’s oil-trading arm, PMI, were entitled to about $50,000 altogether, based on the profits the unit made in 2020, two of the people said. The missed deadline follows an attempt by Pemex last year to claw back bonuses from PMI traders, who were asked to return payments based on 2019 profits to help the company cover a budget shortfall.

A Pemex representative didn’t immediately respond to a request for comment.

In Mexico, profit-sharing is a constitutional right and companies that fail to comply can face fines from the Ministry of Labor of as much as 448,100 pesos ($22,370), according to Jacqueline Alvarez Velazquez, a labor lawyer at Ernst & Young in Mexico City.

Companies in Mexico that do not earn profits are not required to pay the bonus, as well as firms that are exempt from it under Article 126 of the federal labor law. Pemex, for example, is not obligated to pay its employees a profit-sharing bonus, but some of its affiliate companies are.

The government has sought to curb Mexico’s profit-sharing by capping the amount that companies are obligated to pay workers in a new bill approved in April that limits employee outsourcing.

In November of last year, Pemex management told PMI employees to return almost $1 million of bonuses they received in May. But the company later backtracked, and told workers that the return of their bonuses was voluntary.

Workers complained of being pressured to pay back the bonus even after company officials said it was no longer necessary.