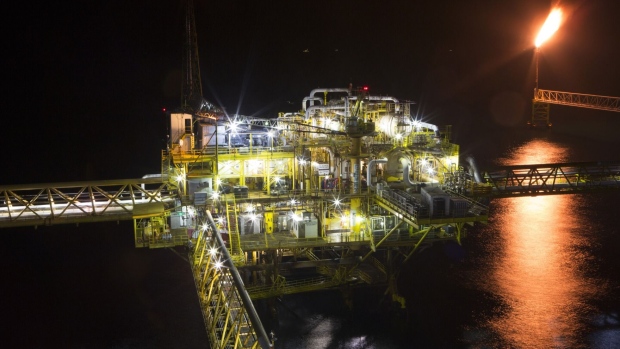 A gas flare burns on a tower, right, at the Petroleos Mexicanos (Pemex) Pol-A Platform complex, located on the continental shelf in the Gulf of Mexico, 70 kilometers offshore from Ciudad del Carmen, Mexico, on Friday, March 28, 2014. , Bloomberg

(Bloomberg) -- Petroleos Mexicanos reported a small increase in third-quarter production after adding more wells, which more than offset the impact of two accidents at its offshore operations.

Pemex’s oil and condensate output rose to 1.752 million barrels a day from 1.736 million in the second quarter, the company said in a statement Thursday.

The gain comes despite the impact of a deadly fire on the company’ E-Ku-A2 platform in the Gulf of Mexico in August that saw oil production temporarily cut by a quarter. There was also a fire in July at the Ku-Maloob-Zaap cluster of offshore fields due to a gas leak from a marine pipeline.

Mexico President Andres Manuel Lopez Obrador has championed the state driller, and has made several efforts to help Pemex shore up its finances. On Wednesday, Pemex Chief Executive Officer Octavio Romero Oropeza told lawmakers that the government would be taking over its future amortization payments, sending its overseas notes to a one-month high. The Finance Ministry has also said that it is reducing Pemex’s profit-sharing duty next year to 40%, from 54% this year.