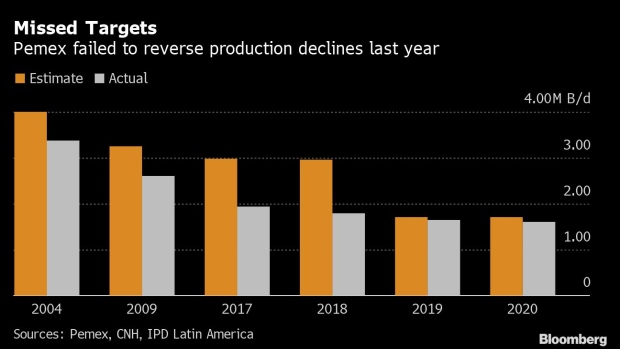 (Bloomberg) -- Petroleos Mexicanos says oil production rose last year for the first time in a decade and a half. There’s just one snag: it’s only true because they changed what they’re counting.

The Mexican state oil producer’s crude oil production, including contributions from partners, declined by 1% last year to 1.66 million barrels a day. But Pemex is touting a 0.23% increase by including condensate -- a natural gas liquid akin to very light crude oil that’s used to dilute the heaviest grades of crude.

“With this production figure, Pemex ends the period of 15 consecutive years of falls in oil production,” the company said in a statement Wednesday evening.

Pemex is under pressure to lift output after failing to meet last year’s target. Mexican President Andres Manuel Lopez Obrador has promised to return the company to former glory by ramping up production at less-costly shallow-water and onshore fields, while scaling back investment in more-promising deepwater areas. His nationalist agenda has seen Pemex stymied in efforts to attract partner companies that could help develop more challenging discoveries.

Condensate output doubled last year to reach 46,000 barrels a day with the discovery of large condensate and gas deposits at fields such as Quesqui and Ixachi.

Yet Mexican crudes destined for export markets, such as its flagship heavy Maya, continue declining as the debt-laden driller lacks resources to invest in major new fields. Pemex hasn’t exported its very light crude Olmeca since 2017, while exports of Maya fell 11% last year to 980,000 barrels a day.