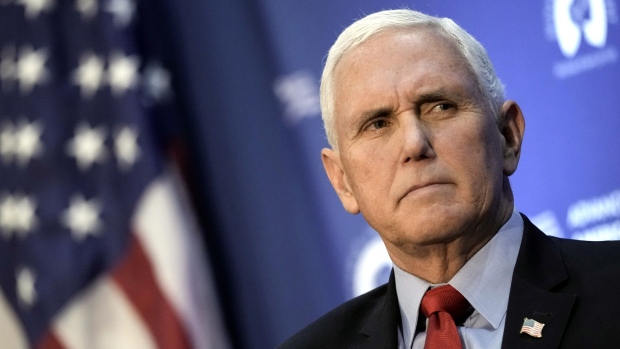 (Bloomberg) -- Former Vice President Mike Pence said he would give “due consideration” to testifying before the House Committee investigating the Jan. 6, 2021 insurrection at the US Capitol and criticized Republicans for attacking the FBI over the search of Donald Trump’s Florida home.

Speaking at a “Politics & Eggs” forum in New Hampshire on Wednesday, Pence was asked whether he would agree to appear before the committee and said, “If there was an invitation to participate, I would consider it.” But he also said it would be unusual for a former vice president to be called before Congress.

“Under the Constitution, we have three co-equal branches of government, and any invitation to be directed to me, I would have to reflect on the unique role that I was serving in as vice president,” Pence said.

Footage released during the public hearings on Jan. 6 included US Secret Service personnel rushing Pence to safety during the riot. He was at the Capitol to preside over the Electoral College vote count as Trump supporters chanted, “Hang Mike Pence” for his refusal to accede to Trump’s demands to overturn the 2020 election.

The House committee already has heard from Pence’s former chief of staff Marc Short and former legal counsel Greg Jacob, and it has presented some of that testimony publicly.

Chairman Bennie Thompson and other members have said for months they had not ruled out asking the former vice president to speak to their panel, but had not decided. They have also said the same about Trump himself.

There was no immediate response to Pence’s comments Wednesday from a committee spokeswoman.

Pence was also asked Wednesday about the Aug. 8 search at Trump’s Mar-a-Lago estate, and after noting “it’s fairly well known that President Trump and I have had our differences,” he said the FBI has been politicized and called for the Justice Department to provide “a full accounting” of why it was necessary to search a former president’s home.

But the former vice president broke from Trump and Republicans who are criticizing the Federal Bureau of Investigations and baseless suggestions that agents could have planted evidence. Some Republicans including Representative Marjorie Taylor Greene are calling for the FBI and Justice Department to be defunded.

“We can hold the attorney general accountable for the decision that he made without attacking the rank-and-file law enforcement personnel at the FBI,” Pence said. “The Republican Party is the party of law and order. Our party stands with the men and women who serve on the thin blue line at the federal and state and local level.”

Pence said “calls to defund the FBI are just as wrong as calls to defund the police” -- a mantra that emanated from parts of the Democratic party after a Minneapolis police officer murdered George Floyd, an unarmed Black man, in 2020.

Pence, a potential 2024 presidential candidate, has publicly disagreed with Trump on the former president’s insistence that he could have rejected Electoral College votes for President Joe Biden. Pence has called for the party to look toward the future and not focus on Trump’s false election claims.

New Hampshire is a frequent stop of presidential aspirants, looking to build momentum ahead of primary elections. Pence is scheduled to visit Iowa later this week, another telltale sign of White House ambitions.

(Updates with Pence comment in second paragraph. An earlier version corrected the day in seventh paragraph.)