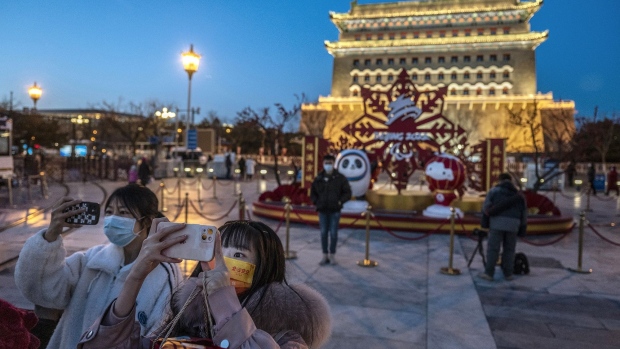 (Bloomberg) -- President Xi Jinping’s rare face-to-face meeting this week with a German lawyer took on even greater significance in the wake of the Communist Party’s biggest scandal in years.

“I believe in the safety, smoothness and success of this Winter Olympics,” Bach, who is set to also meet with Peng during the Games, told Xi. “Everything is ready,” Xi replied, touting his party’s ability to deliver a “simple, splendid” event.

The reality isn’t so simple. While foreign spectators can’t attend the Winter Games due to pandemic curbs, thousands of athletes from democracies that value free speech are descending on Beijing’s Olympic bubble with no shortage of things to protest about in an age where everything in the West is political. That presents Xi with a huge risk in a year when he’s trying to avoid any missteps ahead of a twice-a-decade leadership congress at which he’s expected to secure a third term in office.

China’s focus during the Olympics would be to control domestic media coverage of any acts of protest by athletes who step out of line, according to Ling Li, a lecturer at the University of Vienna who researches Chinese politics and the Communist Party.

“When Beijing submitted the application to host this event, it could not factor in all the PR problems it has found itself in at this moment,” she said. “If Beijing cannot control the behavior of certain athletes, they can control the domestic news coverage of it, which matters most for the Chinese government.”

Peng’s case is particularly sensitive for Beijing. China has sought to tamp down concerns over her well-being ever since she posted a 1,500-character essay on social media in November alleging an affair with a retired top Communist Party official that has raised concerns she was coerced into sex. She disappeared from public view after the post, leading the White House, the Women’s Tennis Association and some of the sport’s biggest stars to express concern for her safety.

Peng has since appeared in public several times, denying in an interview with Singapore-based Chinese language Lianhe Zaobao newspaper last month that she had accused former Vice Premier Zhang Gaoli of sexual assault. That hasn’t satisfied her supporters, with Australian Open attendees wearing T-shirts asking “Where is Peng Shuai?” While organizers of the event initially banned patrons wearing the clothes, they reversed course after the move elicited an outcry in Australia.

Bach of the IOC plans to meet with Peng during the Winter Games, following up on a phone call he held with her in November. The IOC has been criticized for helping China’s damage-control effort to ensure a more successful Games.

The Winter Games were a chance for China to “launder” its reputation on the international stage, according to Jules Boykoff, a professor of political science at Pacific University in Oregon and the author of four books on the Olympic Games.

“The symbolism-drenched opening ceremony is a convenient way to divert global attention away from human rights violations,” Boykoff said, “and shift the focus toward aesthetic beauty, athletic skill, and China’s unequivocal emergence as a rising hegemonic power.”

China has begun stoking nationalism and backing for Xi ahead of the Games, with Chinese Olympians led by speed skater Wu Dajing pledging to “repay the leader no matter what” as part of a series of chants Wednesday in Tiananmen Square. Besides the implication that the athletes owed something to Xi personally, the remark was notable because the word used for “leader” -- “lingxiu” -- was once reserved for Mao Zedong.

China has warned athletes traveling to Beijing that speaking out comes with consequences, suggesting that the Communist Party will take a restrictive interpretation of the Olympic Charter. The document says “no kind of demonstration or political, religious or racial propaganda is permitted in any Olympic sites, venues or other areas.”

Protests so far have largely come from Western governments, with Australia, Canada and the U.K. joining a U.S.-led diplomatic boycott of the Games over abuses including allegations of forced labor in China’s far western Xinjiang region, the first such protest of a host country since the Cold War. In a phone call this week with U.S. Secretary of State Antony Blinken, Chinese Foreign Minister Wang Yi protested what he said were U.S. efforts to interfere with the Beijing Olympics.

When China hosted the 2008 Games, Olympic torch bearers were attacked on the streets in Paris as the flame made its way from Greece to Beijing, leading to boycotts of French products in China. Although Beijing designated special protest zones as per its agreement with the IOC for securing the games, Chinese police detained five protesters who hung a “Free Tibet” banner outside the Beijing headquarters of state-owned broadcaster China Central Television.

Protesters were supposed to be able to demonstrate during the Olympics in the protest zones as long as they received permits from the city. But more than 70 applications were withdrawn or rejected, the official Xinhua News Agency reported.

While China’s decisions to ban spectators and restrict mobility can be justified as public health measures, the experience of the 2008 Olympics still looms large for Communist Party leaders, according to Sheena Greitens, associate professor at the University of Texas at Austin, who researches East Asia and foreign policy.

“Chinese leaders remember that history,” she said, “and are keen to avoid it.”