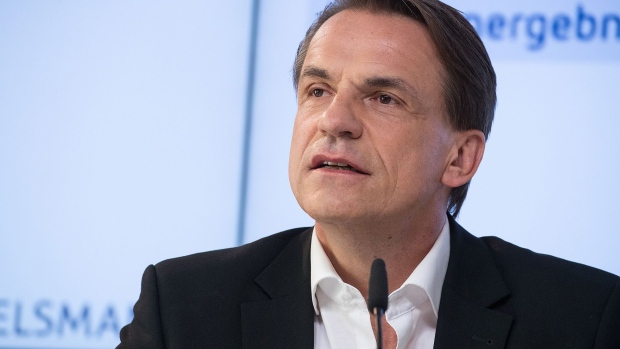 Markus Dohle, chief executive officer of Penguin Random House, speaks during a news conference in Berlin, Germany, on Tuesday, March 28, 2017. Bertelsmann SE, the German media giant, may reconsider its presence in the U.K. because of the country’s decision to leave the European Union, Chief Executive Officer Thomas Rabe said. , Bloomberg

Dohle told the judge at an antitrust trial in federal court in Washington that about half the books sold in the US last year came from publishers outside of the biggest five companies. He testified on Thursday that the shift to e-commerce platforms such as Amazon has “leveled the playing field” between the big and small players.

His comments came after he faced questioning from Justice Department attorney John Read, who displayed an internal company document that described the biggest five publishers as an “oligopoly” structure.

The document was prepared for a board meeting Dohle attended where a possible purchase of Simon & Schuster was discussed. Dohle testified that he disagreed with the oligopoly characterization and didn’t remember whether it was discussed. “It was a very short board meeting,” he said.

The trial, which is expected to last three weeks, comes as the Biden administration tries to crack down on consolidation across industries. The US claims that Penguin’s purchase of Simon & Schuster, the nation’s fourth-largest publisher, will compress guaranteed payments to authors, known as advances, leading to fewer choices for consumers.

The DOJ has alleged that the combination will concentrate power among four publishing houses instead of five. The publishers have argued that the merger will, instead, increase competition and payments to authors.

The government has focused its case on how the largest publishers have cornered the market in buying books from authors and has argued that the merger would give the combined company almost half of the market for buying anticipated top-selling books. The defense shifted the focus on Thursday to Penguin’s smaller slice of the market for selling books.

Daniel Petrocelli, attorney for Penguin and its parent, referred to a presentation from December 2019 that showed Penguin’s share of retail book sales sliding from 25% to 21% since the 2013 merger between Penguin and Random House.

In his testimony, Dohle expressed frustration with Penguin’s failure to keep up with industry growth and said the merger would help the company make back its share. He testified that e-commerce platforms level the playing field because they rely on algorithms that decide which books are “discoverable.”

While being questioned by Read, Dohle testified that his company uses data scientists and pays Amazon to improve placement.

Read also asked about the types of books that were included in were included in the calculation of Penguin’s market share. The data included Bibles, magic trick books, coloring books, calendars, diaries, dictionaries, encyclopedias, puzzles, sudoko, journals and study aides. Dohle said that Penguin publishes books in some of those categories.

Read asked if Penguin ever thought about lowering retail prices to stem its sliding share. Dohle responded that he didn’t think that would ever resolve the problem.

The government lawyer also asked whether Dohle believed Penguin didn’t grow because the book business was mismanaged. He pulled up text messages from Dohle to subordinates where he said that the company “screwed” up on the product side after the merger between Penguin and Random House.

Dohle explained that those text messages displayed his frustration about the company’s development and that his advice wasn’t heeded on how to organize the company. He agreed that the business consists of too many layers of management in acquiring books.

“We haven’t been able to acquire and publish enough of the books that readers want to buy,” said Dohle. He said he thought the company could become more aggressive and nimble on the content side.

During his cross-examination, Dohle described subscription models for books as the biggest threat to the publishing world. He said if consumers can get access to all books in a digital format by paying $9.99 a month that will have a “tectonic” impact on revenues for the industry as well as author pay.

At one point, Dohle was questioned about his commitment to have Penguin and Simon & Schuster keep competing after the merger even when they are the last bidders. The CEO testified that he made that pledge in response to concern from the agent community over the deal.

Petrocelli asked what would happen if Dohle reneged.

“I think it would damage our business,” he said. “Agents and authors would not appreciate it and feel betrayed.”

US District Judge Florence Pan said she doesn’t think agents would stopping working with Penguin if it reneged because it’s a high bidder.

King, known for numerous best-sellers such “IT” and “Carrie,” spoke out against consolidation and warned of the impact it could have on the livelihood of authors. Karp argued that Penguin and Simon & Schuster rarely go head to head with each other -- in response to a government lawyer’s reference to examples of the two companies bidding each other up to win books.

Pan, who was nominated this year by President Joe Biden to the appeals court in Washington, is hearing the case without a jury.