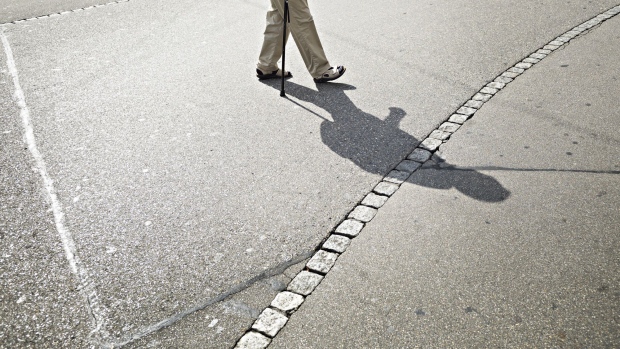 A pensioner walks with the aid of a walking stick in Zurich, Switzerland, on Thursday, Aug. 24, 2017. On September 24, the Swiss will vote on a package of reforms to the pension system, including raising the retirement age for women to 65, bringing it in line with men. Photographer: Michele Limina/Bloomberg , Bloomberg

(Bloomberg) -- Pennsylvania’s biggest pension is facing a federal probe and has hired lawyers to help with the inquiry, just weeks after the $64 billion plan launched an internal investigation into misstated investment performance.

The Pennsylvania Public School Employees’ Retirement System, a fund for teachers and other full-time staff, hired Pillsbury Winthrop Shaw Pittman, according to a notice on its website Tuesday. The pension did not disclose the reason for the probe but said the law firm would “represent and provide guidance to the board in matters relating to a federal investigation and any collateral issues.”

Evelyn Williams, a spokesperson for the pension, and representatives for Pillsbury did not immediately respond to requests seeking comment.

In testimony before the state senate this week Pennsylvania Treasurer Stacy Garrity called the situation “extremely troubling,” adding that three board members including the treasury department objected to the December performance figures. Garrity said she will ensure cooperation with both internal and external probes, adding several pension management officials have been served federal subpoenas relating to the matter.

The disclosure of the probe comes just weeks after the pension announced an error in the reporting of nine-year investment performance numbers used to determine employee contributions for beneficiaries. In December, the board announced returns of 6.38% over the nine years ended June 2020, just barely eclipsing the 6.36% threshold that would’ve triggered higher contributions from teachers and other school employees, according to a statement at the time.

However, the pension disclosed in March that those numbers were incorrect. Since the March disclosure, the Pennsylvania plan launched an internal probe, hired a special counsel to help remedy the issue and a separate outside counsel to investigate the circumstances surrounding the error.