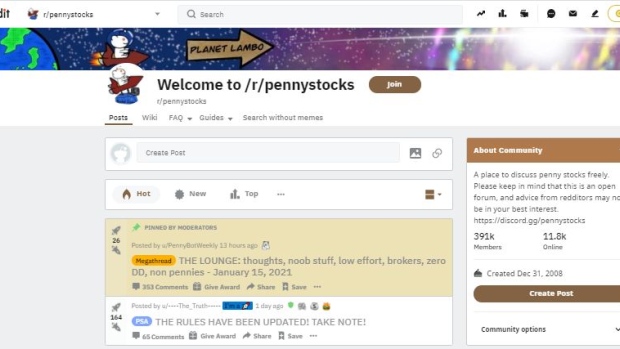 The explosion in penny stock trading has been so abrupt that a Reddit thread devoted to it has been forced to update regulations to curb user shilling.

“THE RULES HAVE BEEN UPDATED! TAKE NOTE!,” blared a post in r/pennystocks Wednesday night. Among the tweaks were changes to the type of content permitted in the thread and the official banning of cryptocurrency-related chatter.

Social media platforms and websites such as Reddit have become must-reads for the Wall Street stock set these days. A forum called r/wallstreetbets, which boasts 1.9 million users, has shown an astonishing ability to move prices. In less than a year, 1 million new users have joined. Now, with penny stocks surging -- last month, more than 1 trillion shares of tiny, off-exchange shares traded -- forums like r/pennystocks, which has 391,000 members, are growing too.

According to the rules update, posted by user “----The_Truth-----”, members of the penny stock forum can no longer promote “any services, newsletters, or social media,” unless it is approved by moderators of the forum, known as a subreddit. Before, the forum only banned promotion of paid products.

“Now all forms of promotion are banned including shilling your social media,” the post reads.

Over the last 30 days, more than 56,000 new users joined r/pennystocks, and more than a third of those came in the last nine days, according to one of the thread’s moderators. In late 2020, the subreddit averaged 1,000 new users per day. That’s since picked up to as much as 4,600 a day.

By 12:45 p.m. in New York Friday, 30 billion shares of unlisted equities had changed hands on U.S. networks like OTC Markets, more than five times the average a year ago. An example is 1PM Industries Inc., which trades for US$0.0008 and has a market-cap just above US$2 million. It saw 1.9 billion shares change hands as its price surged 200 per cent. For the second time this week, almost 4 billion shares of Healthier Choices Management Corp., a US$10 million company that trades for US$0.0001 per share, traded.

In December, low priced stocks that don’t trade on classic exchanges saw more than 1 trillion shares trade for the first time in a decade. For comparison, that sheer volume was almost 50 times the volume traded among securities in the Nasdaq Composite Index, according to Sundial Capital Research.

The Reddit thread also added a formal ban on cryptocurrency talk. “It was an unofficial rule before, but we have made it official,” the post reads. “Crypto related pennystocks are obviously fair game.”