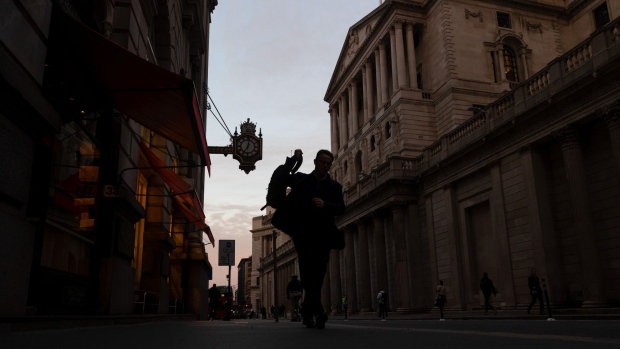 (Bloomberg) -- Reforming European Union insurance rules to release billions of pounds of capital is a key part of the UK government’s program to boost the economy. The market turmoil unleashed by the mini-budget may make such ambitions harder to deliver.

The combination of rising interest rates and jitters triggered by the near blowup in liability-driven pension funds could undermine the government’s efforts to roll back EU-era Solvency II rules, making it more difficult to hit its targets for growth, according to several financial and regulatory experts.

There could be “small tweaks” to Solvency II, but the scope is likely to be limited, according to Huw van Steenis, a former adviser to Mark Carney when he was Bank of England governor. “More a whimper than Big Bang 2.0,” van Steenis said. Two other regulatory experts who didn’t want to be identified discussing government policy agreed that the push to soften insurance regulation may have been weakened by the market turmoil.

The Treasury said it would push ahead.

“We are absolutely committed to delivering reforms to Solvency II, which could unlock tens of billions of pounds of investment into long-term UK infrastructure,” a government spokesperson said. Kwarteng has said he will announce “an ambitious set of regulatory reforms” this Autumn to drive a 2.5% growth target.

Even if the changes are pushed through, higher interest rates could anyway dilute the expected benefits of Solvency II reform. Such an environment shrinks the amount of capital that can be released and reduces the relative attractiveness of the returns offered by infrastructure projects, which the government hoped would be the primary destination for any freed funds.

A piece of technocratic regulation introduced in 2016 to harmonize insurance rules for 28 countries, Solvency II has become a high-profile target in the campaign by Prime Minister Liz Truss and Chancellor of the Exchequer Kwasi Kwarteng to cut red tape and create a Brexit dividend.

While there is broad support in the financial community and across political parties for some reform of Solvency II to suit UK companies and to unlock capital for investment in areas such as infrastructure and climate transition, there have also been warnings that deregulation could increase risks.

The Prudential Regulation Authority, the arm of the Bank of England that is responsible for soundness of the financial system, supports changes to part of the Solvency II regime. But it wants tougher, not lighter, standards for the so-called matching adjustment, which balances long-term assets with liabilities in the form of promises to pay pensions to policyholders until they die.

The distress in liability-driven pension fund investments, which were triggered by falling gilt prices forcing the Bank of England to announce a £65 billion ($74.2 billion) programme to shore up the market, focused minds on the risks of situations where financial firms become forced sellers of relatively illiquid assets, van Steenis said.

That has likely reinforced the PRA’s caution over allowing insurers to invest in a wider array of assets, he said.

“The government’s signature Solvency II reform to ‘unleash tens of billions’ towards green infrastructure is extremely unlikely after last week,” said van Steenis, who is co-chair of the World Economic Forum’s financial services council. The BOE will be emboldened to keep matching adjustments for “illiquid infrastructure” and insurers will also “tread gingerly” in the wake of the market upset, he said.

Still, there are several differences between the LDI issues and insurers, analysts said, including the large amounts of liquid assets that insurers operate with.

The current interest rate environment may also dampen the impact of Solvency II reform. Rising rates reduce the amount of capital insurers will be able to release due to the way their risk margin is calculated. The PRA said in July Solvency II reforms could generate £45 billion to £90 billion from insurers’ capital to invest in the economy, which would be lower in a high rates environment.

Another factor is the improvement in returns on corporate bonds and other assets, which may make insurance companies and pension funds less keen on directing funds into infrastructure investment, further undermining the government’s plans. “I think as yields rise pension fund managers will likely feel less enthusiastic about investing in alternative assets like infrastructure projects,” said Kevin Ryan, a Bloomberg Intelligence insurance analyst.

Many in the City of London expect the Treasury to add more on Solvency II to its Financial Services and Markets Bill, its framework for post-Brexit rules for banks, insurers and asset managers. But the government’s sweeping plans to deregulate the City of London may be harder to achieve since Kwarteng’s speech.

“This is is a broad issue we’re confronting now over the government’s proposals for Big Bang 2,” Richard Portes, professor of economics at London Business School, said. “Events of last week suggest that financial markets are fragile and that you deregulate at some risk.”