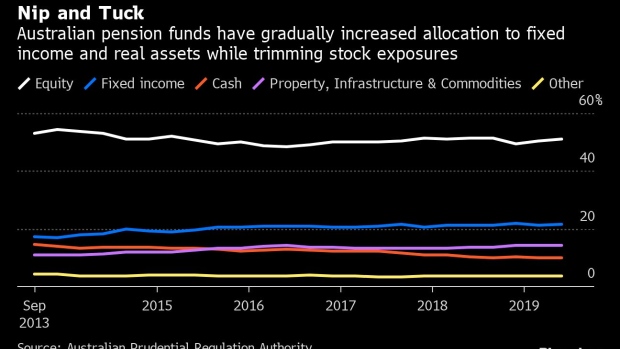 (Bloomberg) -- Australian pension funds are stepping up direct lending to companies, following their global peers into the booming market for private credit in a hunt for higher-yielding assets.

UniSuper, IFM Investors and First State Super -- all giants in the nation’s A$2.9 trillion ($1.9 trillion) retirements savings pool -- are turning to the loan markets, taking on credit mandates or building out their own investment teams.

Banks are “starting to exit some of these sectors, which creates a capital need for other people to fill,” said Nick Footner, the head of fixed interest and cash at UniSuper, an A$80 billion fund based in Melbourne. “We’ve only started dipping our toes into this space. The returns to date have been pretty good.”

Globally, private credit, which includes distressed debt and venture financing, has ballooned from $42.4 billion in 2000 to $776.9 billion in 2018, according to Preqin, a London-based research firm that tracks the asset class. With ever growing pools of capital, pension firms from the Netherlands to Canada are piling in.

In Australia, home to the world’s fourth-largest pension pot, firms have been hesitant to lend locally despite pleas from apartment builders to box makers. They’ve traditionally favored shares and government bonds over other assets classes, and only dabbled in credit markets in the U.S. and Europe.

Still, the largest funds are beginning to make the shift.

UniSuper is almost three-quarters of the way to completing a A$200 million mandate with Tanarra Credit Partners that focuses on sub-investment grade senior secured loans, and is considering further opportunities, said Footner. It’s also in discussions with First Sentier Investors, a unit of Mitsubishi UFJ Financial Group Inc., for a specialized credit mandate, he said.

First State Super, with A$100 billion in assets under management, has invested about A$1 billion in direct lending in Australia in the past 12 months and sees further opportunities, according to Chief Investment Officer Damian Graham.

“We’ve been working alongside some banks where they’re bringing us opportunities to invest in corporate debt because they don’t want to bring in one of their competitors to do it,” he said. “They’re more comfortable to bring in a friendlier lender like a super fund.”

And IFM Investors Pty., which has been investing in specialized debt for 20 years, wants to hire another two people for its local credit team by year end to help get more deals, said Lillian Nunez, executive director of debt investments.

Institutional investors are chasing yield in Australia as spreads are between 150 to 250 basis points above similarly rated private debt in the developed markets offshore and with better protections, she said.

“There’s huge opportunity” as banks ease back from a sector where they had about 90% market share, Nunez said. IFM Investors teamed up with AustralianSuper, the nation’s largest investment fund, in lending Visy Industries A$150 million for 10 years in 2017.

Some of the world’s largest pension funds see an opportunity in Australia.

Last year, Canada Pension Plan Investment Board entered the real estate debt market in Australia and New Zealand through a partnership with Challenger Ltd. The A$500 million of seed lending invests in middle-market real estate loans.

For UniSuper, it’s a “natural progression” to turn to Australia’s loan market after already investing in U.S. high-yield corporate credit. The fund exited its U.S. exposure about a year ago as returns diminished while protective terms became looser, Footner said. The firm returned 9.88% in its default investment option in the year to June 30, the nation’s best performer, according to Lonsec Group.

“Australia is probably the most attractive marginal position for us at the moment,” he said. “The spreads are pretty attractive for the risk you’re taking relative to other places.”

While the fund isn’t putting more money into the U.S. and Europe amid tight spreads and looser protections, it’s considering increasing the size of its A$160 million Asian corporate credit mandate with Blackrock Inc., given the region is offering better returns even with the ongoing trade tensions between Washington and Beijing.

“Whenever we’ve seen bouts of risk off, Asian credit has tended to hold in pretty well,” Footner said. “The nature of the holder base is a bit less flighty than potentially other places.”

--With assistance from Ruben Munsterman.

To contact the editors responsible for this story: Edward Johnson at ejohnson28@bloomberg.net, Peter Vercoe